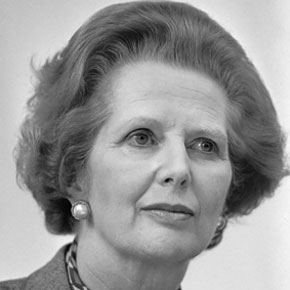 She worked briefly as a research chemist before marrying Dennis Thatcher in 1951 and qualifying as a barrister in 1954.

Margaret Thatcher’s political career was launched in 1959 when she was elected Conservative Member of Parliament for Finchley, a constituency she held until 1992. It wasn’t long before she obtained her first front bench post as junior minister for pensions in Harold Macmillan’s government. The Conservatives lost in 1964 but Margaret Thatcher was re-elected and held a number of posts in the Shadow Cabinet.

Edward Heath became prime minister in 1970 and Thatcher was appointed Secretary of State for Education. The Conservatives were defeated in 1974 following which Thatcher replaced Heath as leader of the party. She became Prime Minister in 1979 when the Conservatives returned to power and she held office for three consecutive terms – resigning in 1990 following a leadership challenge by Michael Heseltine.

During her term of office she privatised state-owned industries and utilities, reformed the trade unions, lowered taxes and reduced social welfare expenditure. Abroad, she cultivated relationships with the world’s leaders, Ronald Reagan in the USA in particular, resulting in an international profile and influence for the UK which has rarely been greater during peacetime.

The two wars in which she led the country, the Falklands war against the invasion by Argentina in 1982 and the first Gulf War (1991) both ended relatively quickly and successfully. Her policies and her views were often controversial however, and she has faced fierce criticism as well as enthusiastic support throughout her career.

In 1992, Thatcher took her seat in the House of Lords as Baroness Thatcher of Kesteven.

Somerville has previously launched two extraordinarily successful appeals in Margaret Thatcher’s name, which have raised funds for the Margaret Thatcher Conference Centre and helped support Fellowships in both Chemistry and Law. The College is now embarking on a groundbreaking initiative to honour the pioneering spirit of a remarkable Somervillian, a trailblazing woman and notable post-war leader.