Somerville students are making a difference around the world through the Thatcher Development Awards.

The scheme awards up to £2000 to students to take an innovative idea around the globe that will aid their personal development and have a positive impact on others.

This year, 6 awards were made. Alexander Brindle (2018, PPE) was one of the 2019 recipients. He spent the summer in India teaching at a school in Bihar, where he also created a computer learning centre to enable the children of the surrounding villages to gain computer literacy.

“I came across the Flowers of Lakshmi School in Bodhgaya, Bihar, by chance two years ago. The school and the town left an impression on me – so much so that I returned with the help of a Thatcher Development Award to try to make a difference.

“Each morning I taught English to a class of children. In the afternoon I managed the computer project, often going around the town to find and purchase the required supplies, before joining the workers I had hired to put plans into action.

“We rented a nearby building, plastered and painted the walls, built the desks, connected the electricity and bought computers. Somerville’s Junior Common Room also supported the project by providing essential funds to buy an inverter battery, ensuring computers and fans kept running during the frequent power cuts.” 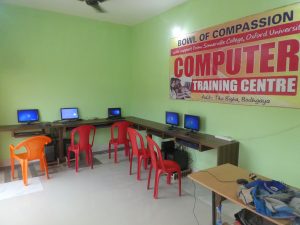 The computer centre in Bihar which Alexander built with the help of a Development Award.

“The impact of global warming here has been striking. An ongoing drought has left many families without water. A priority for me is to raise funds for a new water pump (which costs £278), but we would like to achieve much more: an additional computer to add to our first five; a small fridge so the children can have cool drinks while they wait for their turn; and a water filter.

“This project, which reflects the best of the College’s values of education, public service and empowering women, would not have been possible without the financial support I received from the Margaret Thatcher Scholarship Trust and the JCR.” 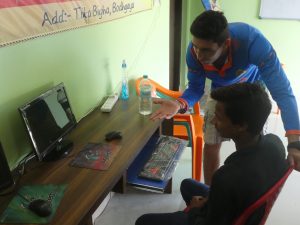 Alexander introduces a teacher to the new facilities.

One of the countless challenges facing healthcare providers in rural communities with limited access to electricity is keeping vaccines cold enough to remain viable. Eleanor Thompson (2018, Engineering), who also received a Development Award in 2019, was keen to put her engineering skills to use in aid, and with the support of a Development Award volunteered at Ecoswell (a non-profit organisation in Peru) to help efforts to tackle the problem.

“I was working in Lobitos. This is a relatively poor area of Peru that often suffers from power cuts, meaning the vaccines in the fridge at the medical post need to be replaced.

“A project was underway to building a wind turbine system to charge two batteries as back-up power. They had a basic prototype, but there was a lot of work required on both the mechanical and the electrical side to get it operational.

“I helped to design and build a mount for the wind turbine, using only resources that could be sourced locally within a tight budget. I also helped with the design of the electrical system, which was more challenging since the components had many different international versions and specifications. 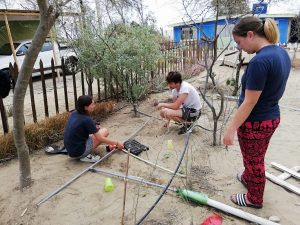 Eleanor also worked on an irrigation system using recycled shower water, along with other volunteers in Lobitos

“Although I was thrown in at the deep end, I learned a lot of engineering. It was the first real hands-on project I have done where I have had to consider the design, budget, environmental impact, construction method, and the maintenance instructions for locals.

“I also benefitted from learning about other projects — such as an ecotourism initiative by Ecoswell in a deprived town nearby—and how they research and quantify the impact of their projects. Their eco-friendly way of living also changed my lifestyle and attitude towards the environment.”