How to build a brain 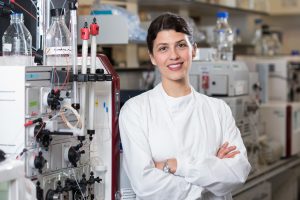 Teneurin and its partner proteins FLRT and Latrophilin play a pivotal role in the formation of synapses (a junction between two nerve cells) in your brain. But how these proteins act early on during brain development, when there are no synapses being formed yet, remained unknown.

Using high-resolution X-ray crystallography, my team and I were able to shine a light on how the proteins behave at this early stage. Working in tandem with teams led by Matthieu Chavent at the University in Toulouse and Rüdiger Klein at the Max-Planck Institute of Neurobiology in Germany, we identified how the proteins guide migrating nerve cells as the brain forms.

In the later stages of brain development, Teneurin and FLRT in brain cells form a strong connection with Latrophilin. We were surprised to find, however, that in the developing brain, these proteins actually repelled each other. This process ensures that cells reach their target brain area at just the right point in your development, where they mature and form a long axon.

Once on the surface of a mature axon, the proteins switch off their repulsive properties and connect together. This induces the formation of synapses and the creation of the networks of communicating neurons that make up your brain.

It was completely new and unexpected to us that the same proteins could lead to completely different reactions depending on their age and location on the brain cell.

With this process now established, we can discover more about how the brain develops. 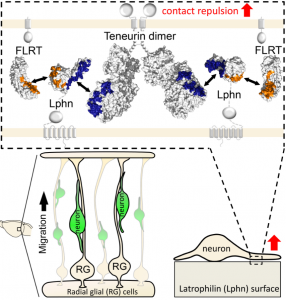