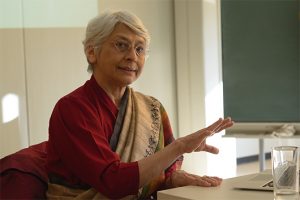 Cited for her services to the study of Linguistics, Professor Lahiri‘s expertise spans historical and comparative linguistics, phonology, phonetics, psycholinguistics and neurolinguistics. She is also the Director of the University’s pioneering Language and Brain Lab.

The first Indian woman to hold a professorial chair at Oxford, she was instrumental in the founding of Oxford University’s Faculty of Linguistics, Philology, and Phonetics. She served as its inaugural Faculty Chair in 2008, and has recently returned to the role for a second term.

Recent advances from her team include the development of a cutting-edge flexible speech recognition system, Flex-SR. The technology was used to create a mobile phone app to help second language learners improve their pronunciation by analysing words and sentences spoken into the app and giving specific personal feedback. Her leadership on the project was recognised by the University with a Vice-Chancellor’s Innovation Award in 2018.

Her work combines theoretical and experimental approaches to answer questions such as why sound alternations exist between different forms of one and the same word and how such words are represented in the mental lexicon, how words change over time, and how they are processed in the brain.

“I am delighted that Linguistics has been recognised in this year’s honours, along with other academic disciplines more regularly represented on such award lists,” said Professor Lahiri.

“Such an honour is not just for a single individual. It acknowledges the efforts and achievements of my team, which includes postdoctoral fellows, students and research colleagues all over the world.”

Professor Lahiri was elected a fellow of the British Academy in 2010, and currently serves as Vice President (Humanities) for the body. She has also been elected a member of the Academia Europaea and an Honorary Life Member of the Linguistic Society of America. She currently holds two European Research Council grants, as well as two Arts and Humanities Research Council grants, including one for a project involving Somerville Senior Research Fellow Professor Frans Plank.