Register for all Somerville events on 17th April here:

Travon Free is an American comedian and actor and writer, with credits including The Daily Show on Comedy Central, for which he won an Emmy, and Any Given Wednesday with Bill Simmons on HBO.

Ella Road (2010, English) is a writer and actor from London whose first play, The Phlebotomist, was nominated for an Olivier Award for Outstanding Achievement in Affiliate theatre.

Gabby Cook Francis (2019, MPhil Politics) studied for her MPhil in Comparative Government as a Marshall Scholar at Somerville and has just accepted her offer to study for her DPhil. Gabby served as the Middle Common Room’s Minority Ethnic Group representative until last term.

Repairing your cells from the inside out: The potential of regenerative medicine

Tradition and Innovation: the classics, new writing, a new theatre?

Informality and Social Protection in the Global South: Reflections from Indian Cities 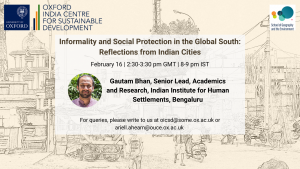