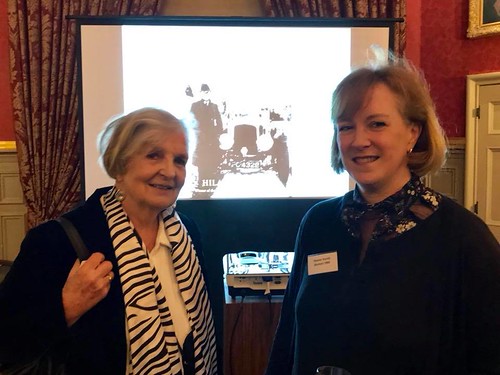 The Somerville London Group is delighted to host Hon Fellow Hilary Spurling as their first speaker of the New Year. Hilary will speak on her new biography of Anthony Powell Dancing to the Music of Time at the Oxford & Cambridge Club, 71 Pall Mall, on Tuesday 6th February 2018, 6.30-8.30pm.

The talk itself will begin at 7.00pm, followed by questions, and there will be drinks served before and after the talk.

Hilary Spurling’s first Biography, of Ivy Compton Burnett, won the Rose Mary Crawshaw Prize and the Duff Cooper Prize. She went on to win the James Tait Black Memorial Prize for her biography of Pearl Buck and the 2005 Whitbread Book of the Year for Matisse the Master.

Her biography of Powell is born of a long friendship with the novelist, and of her earlier A Handbook to Anthony Powell’s Music of Time, a detailed index and guide to his 12-volume A Dance to the Music of Time. It was agreed before Powell’s death that Spurling would write his biography. Reviewers have praised her depth of understanding, both of Powell himself and of his social milieu and approach to writing. This is the first full-scale life of Powell, and Spurling’s familiarity with him, his work and those he knew brings to life a world that is now, for many readers, a curiosity of history. The Guardian has called Dancing to the Music of Time “a compelling portrait of a lost Englishman …. Powell emerges from this exemplary and deliciously readable account not only as a novelist of considerable significance who altered the parameters of the form, but also as a human being of great wit, impressive modesty and firm integrity. He is, as Proust was before him, the great literary chronicler of his culture in his time; and has left us novels both richly meaningful and – let us not forget – dangerously funny.” Click here for the full article.