Welcome to the latest issue of the OICSD newsletter featuring quarterly updates on our research, scholarships and seminars.

It has been a summer of intense heatwaves across the world. As temperatures soared to record-breaking heights in the UK, extreme weather in India has further exacerbated power outages, water scarcity and heat related morbidities, among other challenges. It is becoming increasingly urgent for countries to work towards adapting to and living with extreme heat, especially those with highly vulnerable populations. Adopting sustainable heat resilience and cooling pathways is a key research focus of the Oxford India Centre for Sustainable Development (OICSD) and Research Director Prof Khosla, as noted in The New York Times and other media.

The climate crisis accompanied by the COVID-19 pandemic and violent conflict in various parts of the world has also hiked food prices and deepened food insecurity especially in developing countries. To examine the question of how we might produce both more and healthier food in an environmentally sustainable and socially equitable way, the OICSD held the second annual OpenAg Symposium – Food Futures in a Changing Climate: Reimagining the role of global agriculture on the path to Net Zero emissions – along with UPL on 27 June 2022 (more below).

We are delighted to share that Debbie Driesman, Vice President of Frank Islam and Debbie Driesman Foundation, has joined the OICSD International Advisory Board as our esteemed member. This term, OICSD researchers have undertaken new projects such as researching climate change adaptation in the Sunderbans, and teaching constitutional law at schools in Uttar Pradesh. We have held seminars on the theme ‘Thinking through Toxicity’, unpacking the various meanings of toxicity through an interdisciplinary lens. Take a look at our research and upcoming events, and subscribe here for news and updates from the Centre.

Global food systems are tasked with the complex challenge of feeding a growing population with nutritious food, whilst carefully managing our natural resources and safeguarding planetary health. As both a source of and a solution to global emissions, it is crucial to find ways to collaborate and support agriculture’s transition towards positive climate action, reaching Net Zero, and achieving a more sustainable and equitable future.

Dr Agnes Kalibata, President of Alliance for a Green Revolution in Africa and UN Secretary-General’s Special Envoy to the 2021 Food Systems Summit, gave a keynote address at the second Oxford-UPL OpenAg Symposium ‘Food Futures in a Changing Climate’ in June, 2022, on the need for collaboration, social equality and financial support for efforts towards emission reduction in the agricultural sector.

OICSD’s work on healthcare is growing steadily. Program Director Dr Siddharth Arora’s work on using smartphones for the remote detection and monitoring of Parkinson’s disease has gained traction – the smartphone app has been translated into 13 languages and is being used in an NIHR funded Exenatide drug study. His recent study  proposes a sensitive outcome measure to quantify subtle motor changes in Parkinson’s disease and can be used in neuroprotective trials to predict clinical outcomes. He recently discussed this at the Digital Biomarkers & Digital Measurements EU Summit 2022. His dream is for this smartphone technology to be used in a diagnostic support tool for patients and care providers. In addition, Dr Arora presented his research on modelling the risk of emergency admission to the hospital during the pandemic at the MSOM 2022, and probabilistic forecasting of the length of stay at an emergency department at the International Symposium on Forecasting 2022.

The Gopal Subramanium scholar Swapnil Tripathi, DPhil candidate in Law, is working on a project aimed at making Constitutional Law accessible for school going students in the state of Uttar Pradesh, India. He will conduct pilot seminars in Kanpur, Lucknow, Banaras and Allahabad on understanding of the Constitution’s importance and relevance in everyday lives.

Sanghamitra Mukherjee, OICSD scholar and DPhil candidate in Economics, is collaborating with the WWF on climate change adaptation work in the Sundarbans delta. Using a wealth of camera-trap data and extensive fish-landing data, Sanghamitra will study the health of a range of animal and bird species, and marine life.

Mary De Zouche scholar Aavika Dhanda, DPhil candidate in Zoology, has won a number of grants towards her fieldwork in Northeast India. Aavika’s work explores which eastern Himalayan bird communities are more vulnerable to habitat degradation and why. Her work will shed light on the ecology and behaviour of birds of Dibang Valley in Arunachal Pradesh for the first time.

Although distributive justice is at the core of the climate challenge, energy transitions research is largely focused on aggregate techno-economic outcomes. How can we re-frame climate mitigation research to incorporate well-being outcomes and preserve development opportunities for those in poverty around the world? In this talk, Prof Narasimha Rao, Associate Professor of Yale University, discussed an integrated framework for interdisciplinary research that bridges social sciences with energy-economic models of climate mitigation. Watch here. 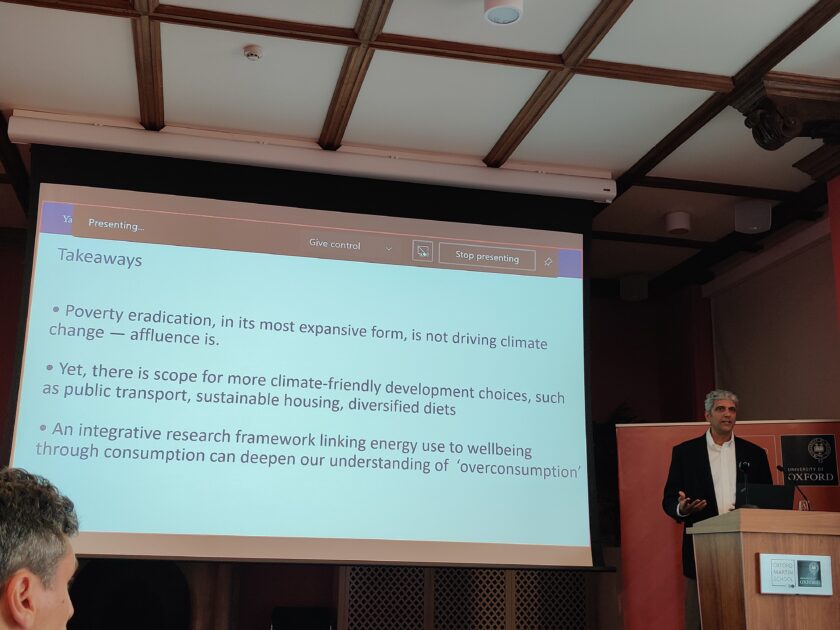 Thinking Through Toxicity series
With an unprecedented rise in air pollution, environmental degradation and ever-widening socioeconomic disparity, everyday life in South Asia involves living within and amidst toxicity. But does ‘toxicity’ only mean contamination? Is it always visible? In this seminar series, we attempted to unpack the multiple meanings and complex logics of toxicity, tracing its different material and structural forms through an interdisciplinary lens:

Dust and Smoke: Air Pollution and Colonial Urbanism in India
Prof A Sharan, Director of Centre for the Study of Developing Societies, discussed the history of smoke as a nuisance in Indian cities, particularly in colonial Calcutta and Bombay. Towards this, he examined the varied sources of energy used for domestic and industrial purposes, the persistence of old trades, the organisation of industrial production, labouring practices, and urban development projects which produced new sites of work, habitats and commodities on the one hand, and smoke and dust on the other. Discussants were OICSD scholar Sumedha Chakravarthy and Vinita Govindarajan. Watch here.

Capable Women, Incapable States: Negotiating Violence and Rights in India
How do women claim rights against violence in India and with what consequences? In this talk, Poulami Roychowdhury, Assistant Professor at McGill University, provided a unique lens on rights negotiations in the world’s largest democracy. Prof Akshay Mangla, Said Business School, and OICSD scholar Aradhana CV, DPhil candidate in Law, were discussants for the event. Watch here.

Women, Caste, Tribe and Urban Waste: The Physical and Social Toxicity of Shit-Work
Waste has arguably become the fastest growing sector of the Indian economy with no end to this growth in sight for the next century. How is this waste economy regulated? How is waste work gendered? Prof Barbara Harriss-White discussed the complicated waste generated by this town, the toxic work conditions, the work-force that is organised around it and the stigmatising/ ‘socially toxic’ social relations of waste generated and disposed of throughout the circuits of capital within the urban boundary. 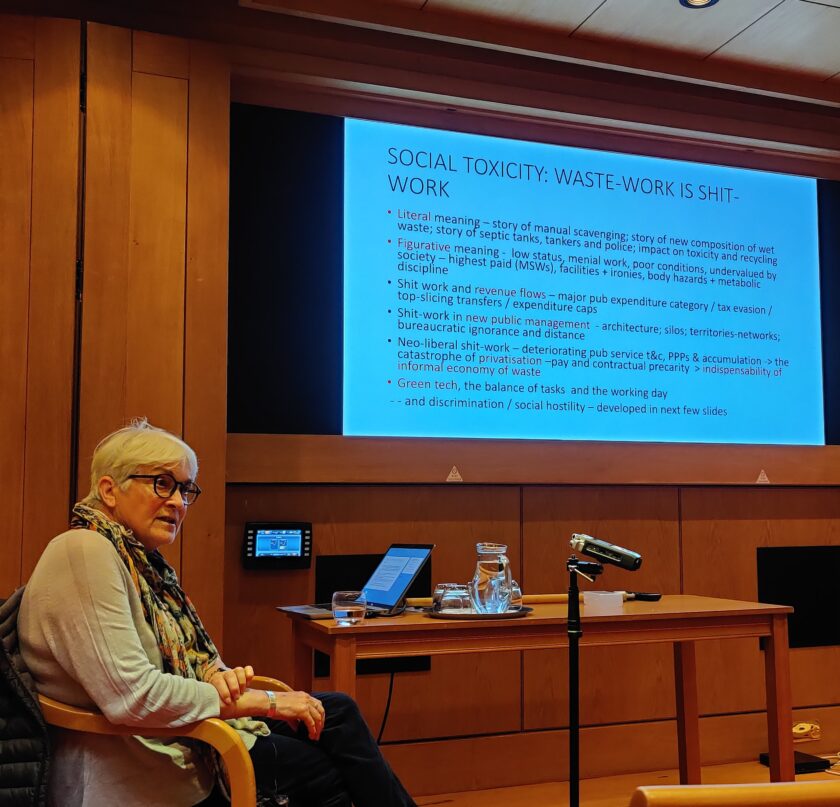 Your support makes our work possible.