What lies beneath: hyperspectral imaging and the John Stuart Mill Library

In this article originally published in the 2019 Friends of the JS Mill Library Newsletter, Professor Albert Pionke reports on a surprising early discovery from the ongoing project to document the marginalia – markings on the pages made by Mill – of the philosopher’s library. 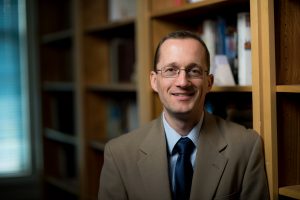 During this project, our team have come across several instances of marginalia that has been erased or rubbed away, making the text unreadable. Following a successful application to the Gladys Krieble Delmas Foundation in 2018, funds were raised to conduct cutting-edge technology called hyperspectral imaging on these items in an attempt to recover this previously inaccessible data. During the spring of 2019, David Howells at the Bodleian Library scanned 71 pages from 6 volumes. The resulting data needs further analysis but some exciting results have already been produced.

In his Textual Introduction to Volume XX — Essays on French History and Historians of John Stuart Mill’s Collected Works, general editor John Robson refers to three phases in Mill’s lifelong investment in French history. The first, which extended into Mill’s early twenties, included his “apprenticeship in British radicalism,” during which, while advocating on behalf of a version of democratic politics inherited from his father, he “dreamt of being a British Girondist” (xciii). Written during this early period and published in the Westminster Review, his essay “Modern French Historical Works” reviews the radical republican histories of Jacques Antoine Dulaure and Charles Sismondi. It generally praises both Frenchmen’s work for accurately reconstructing the fundamental brutality of the medieval period and thereby exposing the truth behind his own conservative contemporaries’ nostalgia for the age of chivalry.

The essay features a phrase that is unique in Mill’s published works: “abominations of the clergy”. (In context, Mill writes that “In this country, it has been the interest of the powerful, that the abominations of the clergy in the middle ages should be known; and accordingly they are known. But is has not been the interest of the powerful in this country, that the abominations of the barons should be known; and consequently they are not simply unknown, but their authors are believed to have been patterns of the noblest virtues”) (p32). Fortunately, this is the very phrase that has been revealed by recent hyperspectral imaging of Mill’s personal copy of the Works of John Locke.

Funded through the generous support of the Gladys Krieble Delmas Foundation, this discovery allows us to append a caveat to Robson’s assertion that “Nothing is known about the composition” of this essay (xciv). We now have material evidence that Mill stored a now-lost fair copy of his article in the back of volume 9 of his copy of Locke. This fact allows us to speculate that Mill may have been reading his 1823 Thomas Tegg edition of Locke while writing about French histories of the Middle Ages, and thus that the radicalism he expresses in “Modern French Historical Works” owes a debt not merely to his own philosophical father, but ultimately to the philosophical father of liberalism in England.

The phrase ‘abomination of the clergy’, found in Mill’s copy of the Works of John Locke. Hyperspectral imaging can reveal the ghostly traces of faded or erased marginalia, leading to new discoveries.