A play written by Somerville Fellow and Tutor Fiona Stafford – and inspired by a family wartime diary – will be performed at this year’s Edinburgh Fringe.

The Dimlight Hours brings to life the daily experience of a woman caught up in air raids, rationing and the destruction of war.

It is based on an essay by Professor Stafford, Home Front, published for the Armistice Centenary in 2018 and inspired by the diary of her great-grandmother Mary Thickett.

Professor Stafford is a Fellow of the Royal Society of Edinburgh and the play is part of their public outreach at the Fringe. The Dimlight Hours, which is informed by contemporary archives, photographs, news reports, and oral history, was written in response to the RSE’s call for creative interpretations of research.

Professor Stafford said: “The play is based on a family diary which re-emerged recently and gives us remarkable insight into the experience of a woman during the Blitz, 1941-43.

“It deals with five generations of women in one family, and various associated stresses, mental health issues and coping strategies – from obsessive cleaning to escaping into the worlds of her favourite books.

“For that reason this may be of interest to other Somervillians and of course I would be delighted to see any former students who are going to be in Edinburgh in August.”

Professor Stafford will be taking part in a Q&A with the company after the performances, the first of which is on Sunday August 18 at 5pm. 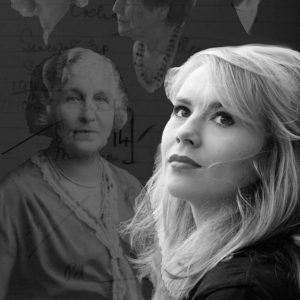 Meanwhile, Somervillians Hannah Andrusier (2018, French and Italian) and Ellie Cooper (2018, PPE) are both performing at this year’s Fringe, while Laura de Lisle (2016, History & Modern Languages)  is taking her show Borchert: A Life to Edinburgh. Nandana Syam (2016, Medicine) is assistant producer of  Numbers, a play about male mental health.

Hannah will be singing with University a cappella group ‘The Oxford Alternotives’; while Ellie Cooper stars in comedy play ‘Redacted Arachnid’. Laura’s play is about the life of the German writer Wolfgang Borchert, who served with the Wehrmacht on the Eastern Front and was imprisoned by the Nazis.

The Oxford Alternotives are the UK’s longest-running student a cappella group. The fourteen-strong group perform original arrangements of classic pop and R‘n’B songs using only their voices, pairing the music with well-rehearsed choreography. They have previously appeared on BBC One’s ‘Pitch Battle’.

Original work Redacted Arachnid is a ‘play about the musical which went terribly wrong’ and follows a company’s attempt to pull off the most expensive Broadway musical ever made – centred on a famous web-slinging comic book hero whose name has been redacted for copyright reasons – after the unexpected death of the director.

The Oxford Alternotives perform at C Viva at 2:45pm every day until August 18.

Borchert: A Life is on at Greenside @ Nicolson Square from August 12-15.

Numbers is at C Aquila until August 26.

Are you a student or alumna who is performing at the Edinburgh Fringe this year? Let us know!