“The women are up to something”

2019 marks the centenaries of the philosophers Elizabeth Anscombe and Iris Murdoch.

In this piece originally published in the 2019 Alumni Magazine, Ana Laura Edelhoff, our Mary Somerville Junior Research Fellow in Philosophy, discusses the two philosophers’ powerful contributions to their field and looks ahead to our upcoming an Anscombe centenary conference on September 11th, and reading party and workshop based around ‘The Sea, The Sea’ for undergraduate and graduate students on October 8th. 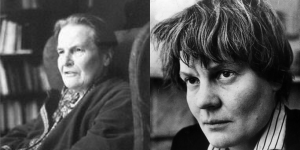 Elizabeth Anscombe, left, and Iris Murdoch, rightThere are times and places, where through a stroke of luck or fate or some other such cause, great minds meet and become friends. Somerville College was such a place for a number of female philosophers that were among the most influential philosophers of the 20th century.

This summer, Somerville College hosts a conferences to celebrate the centenary achievements and the birthday of two of the most famous of these, Elizabeth Anscombe and Iris Murdoch.

Anscombe and Murdoch, both born in 1919, came to Somerville at different stages of their careers. Iris Murdoch started at Somerville in 1938 as an undergraduate reading Greats and finishing with an outstanding first class honours degree; while Anscombe’s connection with Somerville started in 1946 as a Mary Somerville Junior Research Fellow, followed by a position as a lecturer and, finally, as a tutorial fellow from 1964-9.

Both knew eachother and shared many philosopher friends, such as Philippa Foot and Mary Midgley (both Somervillians).

Anscombe became one of the leading philosophers of action. Her most influential book, Intention, studies intentional agency and remains a classic.

But she is also known for her work in moral philosophy, criticizing the ethical theories prevalent in Oxford at the time (the title of one of her essays is rather telling: “Does Oxford Moral Philosophy Corrupt Youth?”).

She never gave in and is known for her uncompromising advocacy of her views. She is famous, for example, for having organized a protest against awarding an honorary degree to former president of the United States Harry S. Truman. She argued that in the bombings of Nagasaki and Hiroshima, for which Truman gave the order, innocents were killed as a means to end – an act of murder in her view.

Her protest was unsuccessful, though, since, according to her own account, the Dons of St John College were told “The women are up to something in Convocation; we have to go and vote them down.”

Iris Murdoch is widely known as one of the most important writers of the 20th century and her novels continue to be read. Her philosophical writings, though less known than her best-selling novels (including The Bell, A Severed Head, and the Booker Prize-winning The Sea, The Sea), are still inspiring.

Murdoch shared with Anscombe a dislike for the thical views that were promiinent at the time and an eagerness to provide an alternative account of morality.

Whilst her inspiring career as a novelist has eclipsed her philosophical ideas, they were no less substantial and revolutionary at the time and can also be seen to pervade much of her literary work. Murdoch was both a novelist and a philosopher, whose philosophical insights and literary projects reciprocally influenced eachother in a constructive and valuable way.

And on Sunday 6th October, we will host a reading party for undergraduate and graduate students on the work of Iris Murdoch. The aim of the workshop is to anlyse and discuss the interconnections between Iris Murdoch’s literary masterpiece The Sea, The Sea and her keen philsophical insights in The Sovereignty of Goodness, a short collection of three essays in which Murdoch argues for a form of Platonism in the ethical domain.

Both the conference and the student workshop are open to the public. To register, please contact analaura.edelhoff@some.ox.ac.uk by Thursday September 5th.