The Women Are Up To Something: A New Book on the Somerville Quartet

In the 1930s, Lipscomb explains, moral philosophy at Oxford pictured the world as value-free. Following the influential arguments of AJ Ayer, all ethical statements were held to be meaningless, since they could never be empirically tested. It took the collision of this view with the unmitigated horrors of the Holocaust to persuade the 24-year old Philippa Foot that Ayers’ theory of ethics (known technically as emotivism or, more colloquially, as the “Boo-Hurrah” theory of ethics) was flawed. 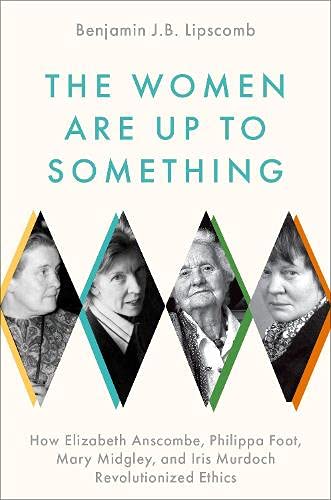 ‘The Women Are Up To Something’ was published in November 2021

Footage of the concentration camps, Foot felt, proved that some acts were undeniably evil, and if philosophy was unable to identify them as such, then there was a major problem with philosophy. In reaching this conclusion, Philippa Foot laid the foundation for the work the quartet would do over the next fifty years, reintegrating ethics into philosophy at a time when it was out of fashion.

Benjamin Lipscomb draws on a cluster of recently opened archives (including those held at Somerville) and extensive correspondence and interviews to tell this story. It is a fascinating exploration of the quartet’s life and thought, anatomising how each one tackled moral philosophy in ways as distinct as their backgrounds and beliefs. It also sheds a light on the role that Oxford and Somerville played in sustaining and defining their relationship.

Somerville was home to all four of these women. No other college at the time would have given its pupils so much encouragement to follow the path they did.

Oxford in the Second World War was the perfect forum for outspoken women such as Foot and Anscombe to find a voice. From 1939 to 1942, the war meant the student body was predominantly female. The effect was not only to “make it a great deal easier for women to be heard in discussion,” but also – and this is understood with greater clarity now – for a diminution of “the amount of work that one thinks is needed to make one’s opinion worth hearing.” It allowed space for the women to tackle the philosophy dominating Oxford at the time.

As to the role played by Somerville, the author Benjamin Lipscomb has kindly added this comment on the College’s influence: ‘Somerville was home to all four of these women, either as students, Fellows, or both. It was an ideal place to form the intense intellectual and personal connections that carried them through their lives. Philippa Foot told an interviewer what first drew her to Somerville, as a young woman of tremendous privilege: Somerville’s reputation of caring more about intellectual distinction than social status. No other college at the time would have given its pupils so much encouragement to follow the path they did. As Foot wrote years later, when it seemed as if Anscombe might have to leave involuntarily: “Somerville is obviously the place for her.” The same was true for all of them.’

Somerville will be hosting an event with Benjamin Lipscomb to discuss the significance of the Somerville quartet in Summer 2022.

Before then, you may wish to attend the following virtual event, which will be held at LSE on Thursday 18 November 2021 (6:00pm to 7:00pm): The Women Are Up To Something. There is also the following in-person event at the Oxford Centre for Life-Writing on 23rd November 2021.

The following reviews of The Women Are Up To Something are available, and this feature is gratefully indebted to them.