The Somerville Archives: Digitising the Paradise of Dainty Devices

A unique collection of autograph poems and sketches by preeminent early 20th Century writers, poets, and artists has been digitised and made available online thanks to a crowdfunding campaign.

A Paradise of Dainty Devices is the visitors’/autograph book kept by doctor and writer Percy Withers (1867-1945), father of Somervillian and first female British Vogue editor Audrey Withers (1924, PPE), who donated the collection to Somerville in 1976. The beautifully bound volume is no ordinary visitors book: it contains handwritten contributions from writers such as AE Housman, WB Yeats, and Robert Bridges, alongside sketches and watercolours by artists including Paul Nash, William Rothenstein and Max Beerbohm. Although most of the poems have been published elsewhere, the sketches and paintings are unique.

Percy Withers trained as a doctor, but ill health prevented him from practising to any great extent. Fortunately his wife, Somervillian Mary Withers (née Summers, 1881) had enough private wealth to enable them to live comfortably and entertain Withers’ large circle of illustrious friends at their house Souldern Court, on the borders of Oxfordshire and Northamptonshire.

Somerville lacks the facilities to keep the valuable collection on permanent display but, by digitising the volume, this unique work can now be seen and admired by a much wider audience. Digitisation is an expensive process, however. A successful crowdfunding campaign in 2018 gave us the opportunity to photograph, catalogue and upload the book to the Bodleian Library’s Digital Bodleian site, supported by the generous support of Somerville’s friends and alumni.

Following a hiatus brought on by the pandemic, this important collection can now be viewed anywhere in the world.

View ‘A Paradise of Dainty Devices’

A Word of Thanks

We are particularly indebted to the generosity of Karen Gray and her husband Ian, the current owners of Souldern Court for their generosity in supporting this campaign. Of their involvement, Karen writes: 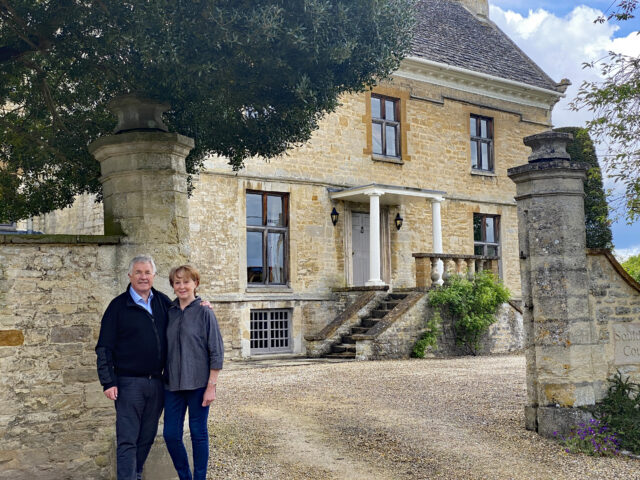 A picture of Karen and Ian Gray outside Souldern Court.

“My interest in the Withers family began with a locked cupboard in Somerville College library. Hidden away inside was a hoard of correspondence, photographs taken by Percy Withers of his many guests, and the handwritten draft of his autobiography, including a description of the joyful day he first saw his future home (and later ours), Souldern Court.

Here began a fascination for my husband Ian and I that continues to this day. I will always be grateful for Somerville’s generosity in unlocking that cupboard and allowing me to explore this remarkable archive.”