David Garrick expert Nicholas D. Smith has uncovered new evidence to suggest that Somerville’s Second Folio was once in the famous actor’s possession. He takes us through the evidence and what this changes about our approach to the book. 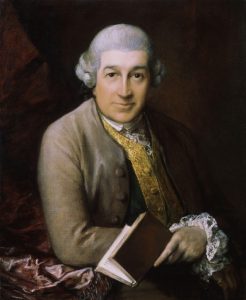 Who was David Garrick and why did he have a Second Folio?

David Garrick is regarded as one of the greatest actors of the 18th century. He popularised a ‘naturalistic’ style of acting which contrasted strikingly with the leaden manner of delivery that prevailed at the time. ‘I copied nature’, he said.

He was also an influential figure in the London theatre scene through his management of the Theatre Royal on Drury Lane from 1746-76. His power over choices of actors and repertory, combined with his own talent and passion for the Bard, made him perfectly placed to lead the mid-18th century Shakespeare revival.

Off-stage, Garrick was an avid collector of old English plays. His collection was a major scholarly resource for the textual editing of Shakespeare’s dramatic canon in his own time and continues to be today.

His contribution to Shakespeare’s legacy includes adapting and re-popularising several of the plays, including Hamlet, King Lear and Romeo and Juliet. He also conceived of and stage managed the extravagant, but waterlogged (his control didn’t extend to the weather!), Shakespeare Jubilee at Stratford in 1769.

If the bookplate alone wasn’t enough to prove Garrick’s ownership, why can we be more sure now?

It’s right to be cautious – bookplates are not necessarily definitive evidence of ownership. There are examples of collectors of theatrical memorabilia who have affixed Garrick’s bookplate to books that he never owned (which is particularly obvious when the book post-dates his death e.g. a copy of Bram Stoker’s Personal Reminiscences of Henry Irving), or ones which he did own but not necessarily that specific copy.

But with the aid of several new historical sources, it’s now possible to place the book more definitively among Garrick’s collection.

According to the Rev. Thomas Rackett, who was one of the executors of Garrick’s wife, Eva Maria, catalogues of Garrick’s library recorded that he owned three Shakespeare folios.

When the library was auctioned off in 1823, the sale catalogue listed a First Folio (this is now owned by The Queen’s College, Oxford) and a Second Folio which the catalogue described as a ‘tall copy, corner of last leaf MS’.

We know that there was another Second Folio in Garrick’s library as George Frederick Beltz, also one of Mrs Garrick’s executors, selected it for himself under the terms of her will. This copy is now in the Folger Shakespeare Library.

The description of the Second Folio in the 1823 catalogue as an unusually ‘tall copy’ seems to match a description of a Second Folio with a Garrick bookplate by 19th century Garrick biographer Percy Hetherington Fitzgerald in The Book Fancier; or The Romance of Book Collecting (1886):

“A fine tall copy in Russia extra, gilt edges, with arms stamped in gold on the sides… a copy of unusual interest, partly from the fact that it belonged to David Garrick and contains his bookplate, and partly because copies are rarely found with such large margins. It measures 13½ by 9 inches, and has some of the leaves with rough cut edges”

Fitzgerald is discussing the Second Folio that had until recently been in the library of George Meek (ca. 1801-59) of Brantridge Park, Balcombe, Suffolk (Fitzgerald had referred to Meek’s ‘fine library’ earlier in his book).

The Somerville Second Folio also has George Meek’s bookplate, and the librarians have confirmed that the volume’s physical characteristics match Fitzgerald’s description.

It was bought in 1885 by Charles Erskine Scott Wood of Portland, Oregon. He loaned the book to Richard H. Thornton in 1897, who recorded that ‘it contains Garrick’s book-plate, and is in good condition’.

Sadly, it is not known how this Second Folio migrated from North America to the United Kingdom. It passed into the ownership of Marjorie Ball, a student at Somerville from 1912-16. She deposited it with the college in 1970 before bequeathing it outright in 1988.

But other than this missing link, it’s now much easier to say with some certainty that the book once belonged to David Garrick.

What does it mean for the book to know that it belonged to Garrick?

Since the nineteenth century, First Folios have been regarded as prized bibliographical trophies and treated sometimes as quasi-devotional objects. As such they confer status upon their owners.

While the Second, Third and Fourth impressions lag behind the First Folio in terms of financial value and prestige, the name of a significant former owner, such as Garrick, can enhance both.

Beyond monetary value, connecting the Somerville copy of the Second Folio with Garrick situates it within the burgeoning eighteenth-century Shakespeare industry.

David Garrick played a key role in the revival of Shakespeare in the 18th century, both as an actor and by allowing scholars free access to the plays in his library in order to create new editions. This book may well have supported both endeavours.

It acquires interest, beyond factors of comparative rarity and age, through the accumulated histories of its previous owners. 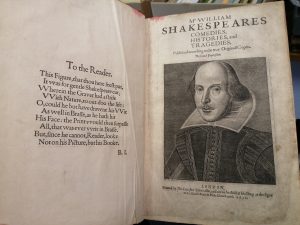 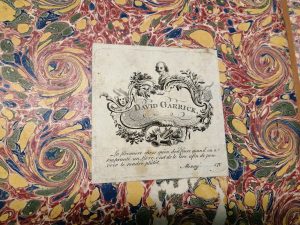 David Garrick’s bookplate in the volume 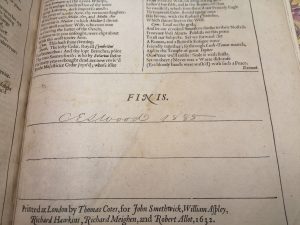 Charles Wood’s signature in the book