Somerville is launching a new refugee scholarship to provide support for outstanding scholars who have been forced to migrate from their home.

Starting from October 2020, a fully funded place will be offered at Somerville for a refugee student on a postgraduate programme – though there are hopes to expand and include undergraduate study at a later date.

The new refugee scholarship is intended to meet the needs of highly able students whose education has been disrupted by forced migration. According to the UNHCR, while half of refugees worldwide are under the age of 18, only about 3% enter higher education and funding is a major barrier.

The initiative will be funded through donations made by alumni, friends and students, and there are plans to launch a crowdfunding campaign in February to maximize the support that can be offered.

The College also announced plans to seek recognition as a College of Sanctuary. The scheme, which grew from the City of Sanctuary movement, involves pledging to provide the most welcoming and accessible environment possible for refugees and asylum seekers.

“Somerville and the University of Oxford have a proud tradition of offering refuge to those fleeing persecution and violence around the globe,” said Somerville’s Principal, Jan Royall.

“Lotte Labowsky, a classicist and a Jewish woman from Germany, escaped her native country after Hitler came to power and became a Fellow here at Somerville. She was one of a number of eminent German scholars, persecuted under the Nazi regime, who were assisted by Somerville. Her connection with us lasted until her death in 1991.

“I am delighted that we are building on that tradition by offering an opportunity to a student to achieve their full potential at Somerville. In recent years, the college has worked hard to engage with refugees in our local community, and I look forward to strengthening that further as we apply for College of Sanctuary status.”

Talisha Ariarasa, president of Somerville’s Junior Common Room (JCR), which represents undergraduates, said that “Inclusivity is in the fabric of who we are as a college and is a value we as a JCR work hard to uphold.

“We recognise that the circumstances into which you are born are factors beyond one’s own control and have a great impact on your life.

“The JCR wholeheartedly supports this scholarship because we believe that excellence is excellence and can be found in all pockets of the world and, as a college, we want to offer all those who can flourish at Somerville the opportunity to do so.

“We look forward to continuing to support refugee causes and are excited to welcome our new scholars with open arms.”

Andrew Wood, president of Somerville MCR, which represents graduate students, added that “Somerville has always been a place that strives to include the excluded. The MCR is proud that we as a college are able to support such a scholarship and we look forward to welcoming our new scholars in the near future!”

The new scholarship reflects a broadening of efforts at the University of Oxford to support refugees. Mansfield College have also announced plans to create a new refugee scholarship and apply for College of Sanctuary status; the Oxford Students Refugee Campaign, a student-led initiative, has provided financial support for seven refugee students at Oxford in recent years; and further work is taking place to create new provision across the collegiate university.

Full details about eligibility criteria and how to apply will be made available in the Spring. 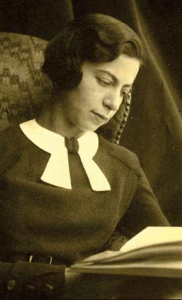 Lotte Labowsky first arrived at Somerville as a refugee in the 1930s, and went on to become a tutorial fellow here