The prestigious award, which includes a £500 cash prize, is made annually to the best submitted postgraduate thesis in the field of Italian studies.

Rebecca took the 2020 prize with her doctoral thesis ‘Figures of Love: Amor from Antiquity to the Italian Middle Ages’, which explores the history and development of love personified from classical Rome to pre-Renaissance Italy, she writes. 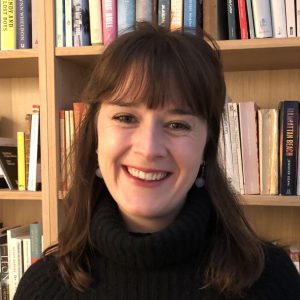 I am delighted to have been chosen for such a prestigious award. I am very grateful to the rich and thriving Italian studies community at Oxford, from which I have drawn much inspiration and strength, as well as to Somerville college, the home of my postgraduate studies since I arrived in Oxford in 2015. I am particularly indebted to my supervisor, Elena Lombardi, without whose impeccable guidance and artful editing I could not have produced this piece of work.

My thesis, Figures of Love: Amor from Antiquity to the Italian Middle Ages, offers a broad cultural history of the many figures used to personify love from classical Rome to pre-Renaissance Italy. Love is a slippery subject; its effect can be physical — capturing, striking, controlling — but its physical form is not always clearly described. This ambiguity is exacerbated by the fact that the Latin word amor, the root of ‘love’ in romance languages, is both an abstract concept and the name of a series of famous figures, from the Cupid of Classical Antiquity to the courtly Lord of Love developed in medieval poetry, and even the Christian God.

Tracing the tendrils of tradition that link these figures into one history of amor, my thesis examines canonical authors including Virgil, Ovid, and Dante, as well as lesser known late antique poets (Ausonius, Dracontius, Ennodius), and various medieval sources (from the Roman d’Enéas to the laude of Jacopone da Todi), culminating in close readings from the early Italian tradition with a particular focus on Dante, Petrarch, and Boccaccio. Complementing this textual network, I examine a broad spread of examples from visual culture, from Roman Imperial wall-painting to late antique silverware and thirteenth-century manuscript illuminations.

This research was supported and inspired by the Somerville college community. As a recipient of an Margaret Thatcher Scholarship Trust development award I was able to deepen the connection between my studies and the college when I organised an exhibition in the college library with items from the special collections, focused on the history of Dante Studies at Somerville, which dates to the college’s earliest days. The exhibition involved members of the SCR, MCR, and JCR and led to a successful crowd funding campaign that raised over £20,000 to conserve treasures from the college library for future readers. 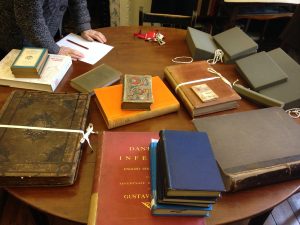 Items relating to Dante studies from Somerville’s special collections, in an exhibition organised by Rebecca

In January 2019 I was able to combine the remaining funds from my Development Award with a small grant from TORCH to found the interdisciplinary network PERLEGO: Critical Perspectives on Image and Text. After several successful seminars at Somerville, my co-founder, Vittoria Fallanca (New College), and I were able to build PERLEGO into a thriving research network that hosted its first international conference in October 2020.

It was also via the Development Award scheme that I was able to explore my interest in material culture through practical experience working in museums. After working in public and academic engagement at the Ashmolean in the winter term of 2019, I was able to travel to San Francisco in January 2020 to take up an internship in exhibitions at the Fine Arts Museums of San Francisco, an unforgettable experience which has informed and inspired my academic work and which would not have been possible without the generous support of the college.

These initiatives are all deeply rooted in my connection to Somerville and so it is to the college that I owe the greatest thanks for being the home and the launchpad for the intellectual adventures that have propelled me from masters student to PhD. I am delighted to share the news of this prize with fellow Somervillians and thank the college community for the support and inspiration it has given me.