The Somerville Medievalist Research Group was first conceived by a group of Somerville academics more than 10 years ago as a means of discovering shared interests and exploring topics beyond the strict boundaries of its members’ respective disciplines. Today, this eclectic group represents the largest college-based body of medievalists within the university, with its latest volume joining the earlier Aspects of the Performative in Medieval Culture (2010) and Polemic (Language as Violence in Medieval and Early Modern Discourse) (2015), with a fourth volume on ‘Openness’ forthcoming.

Medieval Temporalities asks how time was experienced in the Middle Ages through a collection of perspectives on personal, artistic, literary, ecclesiastical and visionary responses to time during the period. Emphatically European in scope, it looks to the literary and devotional cultures of England, Italy, Germany and Russia ­to consider how the ever-present awareness of eternity impacted the perception of human time, noting that medieval experiences of temporality often share many commonalities with our own.

Speaking of these unexpected correspondences, Professor Suerbaum notes that, ‘Many of the contributions in the book observe how medieval ideas about living in time have influenced contemporary attitudes, with the modern concept of mindfulness, for example, being clearly related to thirteenth-century conversations about what eternity meant. Eternity to the medieval mind was not just an abstract concept – but a way of experiencing the intensity of the present moment. ’

Dr Sutherland, who contributes an article on temporality and female devotion in thirteenth century England, is keen to highlight the group as a model of interdisciplinary working rare within academia. ‘For me, this research group highlights Somerville’s expansive and inclusive nature – it has given us the space to diversify and explore our ideas in new and fruitful ways.’

‘That, to me, is the strength of this group,’ agrees Professor Suerbaum. ‘From the outset, it has provided a way of exploring current questions that are in the air, because Medieval Studies deals with a world which is very obviously at the roots of Western culture, but is also very remote, and therefore addressing how the one world can inform or adumbrate the other is often highly revealing.’

One such opportunity of speaking to the moment came in 2016, on the morning of the Brexit referendum results. The group had been scheduled to meet and discuss initial research ideas, and duly did so, despite the pall of disappointment felt by every member of the group, including several EU nationals whose lives in the UK had just been rendered highly precarious.

‘When we met that morning,’ says Professor Suerbaum, ‘we were able to reaffirm the sense of a like-minded community working together to illuminate a period shaped by a sense of European continuity, where national boundaries did not exist and texts were transmitted across a much wider region.’

It is hardly surprising, given the group’s interest in exploring topical resonances between the modern and Medieval, that their next volume has openness for its theme. ‘That was very much a response to the sense of there being increasing boundaries and borders, and a rejection of anyone different,’ confirms Professor Sutherland.

The fruits of the philosophical openness and inclusiveness espoused by the Somerville Medievalist Research Group are clear to see. Medieval Temporalities features contributions from the Ashmolean’s Mellon Teaching Curator as well as from those whose careers have led them away from Somerville, but for whom the group remains an important space for discussion and exploration.

Within the Somerville community, it is clear that the Middle Ages still speak powerfully, crossing the very temporal boundaries that the volume sets out to investigate. 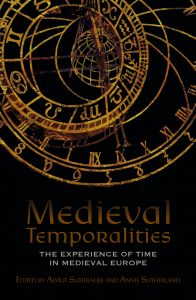