We are proud to announce our support for a new campaign to safeguard Afghanistan’s musical heritage by evacuating its musicians and offering sanctuary to them in the UK.

Following an online launch event hosted by Somerville on the 29th of September, the campaign, which is led by historian Dr Katherine Schofield, published a letter in The Times yesterday drawing attention to the horrifying and dangerous circumstances Afghan musicians now live in. The signatories include Somerville’s Principal Jan Royall, as well as actor Stephen Fry, singer Peter Gabriel and the author Phillip Pullman.

Afghanistan’s new rulers have established a state which is hostile to musicians. The regime swiftly banned the public playing of music, which they regard as “un-Islamic” and “forbidden” according to their spokesperson. Music is no longer broadcast on radio or television (with the exception of the national anthem) and musicians must forfeit their livelihood.

The consequences of refusing to adhere to the prohibition can be deadly. Taliban officials have destroyed instruments and assaulted musicians, and on August 28th, folk singer Fawad Andarabi was reportedly executed for refusing to set aside the music of his people.

The many Afghan musicians who have been unable to escape the country currently have few options but to find a new career, allowing Afghanistan’s centuries-old musical traditions to be extinguished. The Campaign hopes to persuade the UK government to offer sanctuary to Afghan musicians, so that they can continue their craft in safety.

As a University College of Sanctuary, Somerville is strongly committed to the plight of all peoples seeking sanctuary in the face of violence and persecution. The music of Afghanistan is particularly close to our hearts after we were able to meet the amazing Ensemble Zohra, Afghanistan’s first all-female youth orchestra, whom we hosted for a tour to Oxford in March 2019. Those empowered young women we saw celebrating their national heritage on the stage of the Sheldonian Theatre have now been silenced. While 100 of the Afghanistan National Institute of Music’s most at-risk students were evacuated yesterday, those students, staff and their families who remain are in grave peril.

Somerville College is united in its concern for the people of Afghanistan during the current crisis. We remain in close contact with our Afghan students, Afghan alumni and friends and are working with colleagues across the university to find ways of supporting others whose lives are in danger.

For more information and a full list of signatories, visit https://afghanmusicians.wordpress.com/. 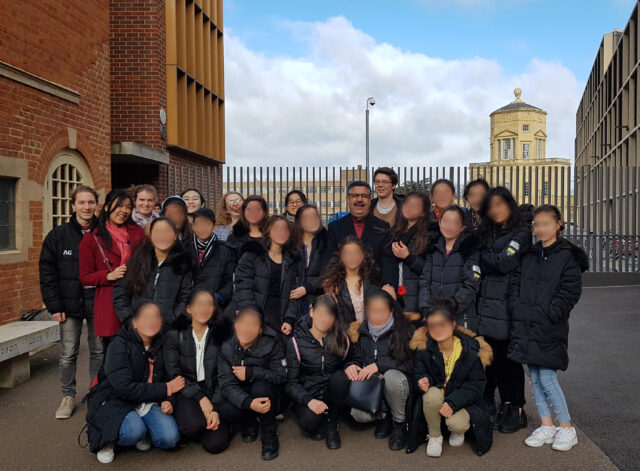 In 2019, Somerville hosted Afghanistan’s only all-female youth orchestra, Ensemble Zohra, as part of their tour to the UK. Pictured: Members of the ensemble and Director of the Afghanistan National Institute of Music, Dr Ahmed Sarmast, are joined by their Somerville student hosts. For the safety of the ANIM students, their faces have been blurred. 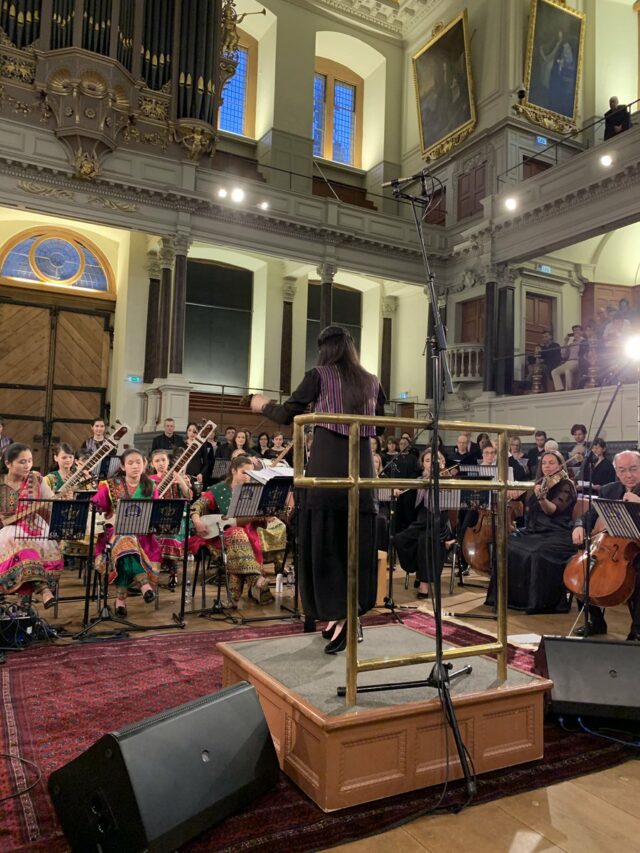 The Ensemble performed alongside the Orchestra of St Johns and a specially formed Somerville Community Choir in the Sheldonian Theatre. Photo: Dr Jackie Watson

Open Letter to the Sunday Times

In the past six weeks the Taliban have carried out assassinations of traditional  musicians; brutally beaten performers; banned music on radio stations and in public places; and destroyed instruments in institutions such as the national broadcaster, RTA. Afghan musicians are now in hiding, moving from house to house, terrified for their lives. They are at imminent and extreme risk.

All of these musicians embody a vision of Afghanistan’s future in which freedom of expression and ethnic harmony can flourish. We believe that the public, and our own musical and creative arts community, would overwhelmingly support the resettlement of these unique and highly skilled musicians in the UK, offering them homes and opportunities to perform.

As a global champion of freedom of expression, the United Kingdom has given sanctuary to many refugee musicians over the years, who in turn have enriched our musical life. In light of this, we call on the government to offer urgent humanitarian visas to Afghan musicians so the UK can play its part in ensuring they — and their invaluable cultural heritage — are not lost for ever.

This letter was originally published in the Sunday Times on October 3rd, 2021