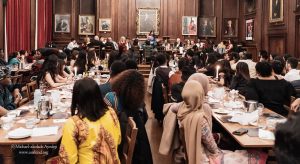 The event, which was conceived and led by the JCR’s President and Ethnic Minorities Officer, Talisha Ariarasa (2018, Jurisprudence), began with a panel discussion featuring three BAME business leaders and role models. This was followed by a special BAME formal hosted by the College Principal, Jan Royall.

A common theme was the benefit to businesses in promoting diversity. Vanessa Kingori spoke about how established wisdom that cover stars needed to be young, thin, white and beautiful crumbled when editions of Vogue featuring Rihanna and Oprah Winfrey became record successes for the magazine.

“Diversity isn’t a problem to be solved,” added Karen Blackett. “It is a solution to growth and an opportunity.” 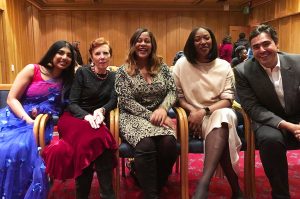 The panel was followed by a vibrance-themed BAME Formal, which saw members of the BAME community along with their family and friends gather for a three-course dinner of koftas and falafel, jerk chicken, and gulab jamun, with the chicken proving to be especially popular.

The evening was enlivened by performances from the ACS Gospel Choir and from poet, actor, musician and decolonisation campaigner Oluwafemi ‘Femi’ Nylander, who performed his spoken word piece ‘Dreaming Spires’, written while he was a student at Oxford to talk about his experiences of racism and call on the university to do more to address issues around race.

“The inspiration behind the BAME formal came from the vibrant and talented BAME community that we have at Oxford,” said Ariarasa.

“We wanted to celebrate the efforts made by this community to push for greater diversity within the university, and themselves be the change.

“For me, the triumph of tonight was seeing the expression of a multitude of cultures through dress, food and music, and the strong sense of community which filled the entire room.”

The evening featured an announcement by Somerville’s Principal that the College is set to offer a new BAME scholarship.

The Raj Tulsiani Scholarship is the result of a partnership between the University’s History Faculty and the College made possible by the generous support of the Green Park CEO. The scholarship will be awarded to a BAME student reading a Masters in History, with the first scholar starting in September 2020.

Speaking to student newspaper Cherwell earlier this year, a University spokesman said: “Excellence has no set race, background or gender and we are determined to build a more inclusive Oxford.

“We continue to make good progress towards this goal and are proud to be one of only 10 UK universities to hold a Race Equality Charter award.”