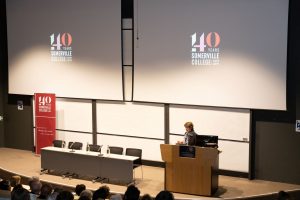 I am delighted to be here to celebrate Somerville and all that you have accomplished and contributed over the past 140 years.

Somerville has brought to the University generations of smart, ambitious, independent minded women, as students, fellows, and Principals, not to mention two prime ministers, including the only British scientist to become prime minister, and the only British woman to have won the Nobel Prize for science. The University is a better, richer, more interesting place, thanks to Somerville.

I feel a number of personal connections to Somerville. I just love the John Stuart Mill Library. I wish Mill’s writings on issues I care about – women’s rights, freedom of speech, the purpose of a University and Ireland – were required reading for latter day politicians.

One of my favourite – prejudices, that is – is the description in 1873 by Harvard Medical School Professor Edward Clark of the condition Hypothalmic Amenorrhea (or studying too much). He declared that the uterus had a voracious thirst for blood and that if college women thought too much, their brains would draw blood from the uterus, causing it to shrivel up with the risk of their becoming “analogous to the sexless class of termites”.

Another link is to my alma mater, Trinity College Dublin, which historically has had a tradition of mutual degree recognition with Oxford and Cambridge. Trinity admitted women for degrees in 1904, but the first women didn’t graduate until 1908, so in the three years before Trinity graduated their own women they were able to confer degrees on women who had studied in Oxford or Cambridge. Thus emerged what become known as the “Steam Boat Ladies”. 700 women, including many Somerville graduates, travelled by steam-boat to Dublin to be conferred with a degree based on the work they had done here. That so many exploited this loophole in such a short period shows just how important their degrees were to them. Many of these women went on to distinguished careers, often in education, founding and leading girls schools across the UK.

We have come a long way since then but the pace has been slow. Women were finally, and belatedly, admitted as full members of the University in 1920. The first female professor was appointed in 1948, and the first female Vice-Chancellor in 2016, and last year, for the first time, we admitted more female undergraduates than male.

Women’s education is as important now as it ever was but the battleground has shifted. While the pace of change in Britain has been slower than many of us would have wanted, and work remains to be done here to achieve full equality, nevertheless, the trajectory is clear. The real work, I believe, has now moved beyond Britain and to the developing world.

At a time when global resources are under unprecedented strain, investment in women’s education is the ultimate win-win for governments seeking to promote economic growth while also investing in social well-being and environmental sustainability. A child whose mother can read is 50% more likely to live past the age of 5.

Women’s education is a proven driver of prosperity and a strong indicator of national progress. A 1% increase in female education raises the average GDP by 0.3%. Where women are educated, child marriage, underage pregnancy and violence against women become less common. Since well educated women produce well educated children who are also more likely to be vaccinated, well-nourished and healthy, they contribute to a virtuous circle of social improvements.

I have often wondered how many poems and books would have been written, musical scores composed, diseases cured, if women had had access to the same education as men over Oxford’s 800 year history.

Today I wonder just how much is being lost in countries where girls’ literacy rates are so far behind their brothers.

I grew up in a family with three brothers and three sisters and, believe me, there is nothing like having three brothers to explode the myth of male superiority.

Somerville, with its open and internationalist outlook and its long-standing overseas ties, especially to India, continues to lead the way in making the case for women’s’ education the world over.

So, Somerville, congratulations on your birthday, and thank you for all you have contributed to Oxford University.

This speech was originally given at Somerville’s 140th birthday party event on the 20th October.