In a year when things have often felt bleak, it is a source of hope and pride to learn that Somerville alumni are once again making news for the best possible reasons by gaining accolades for their environmental work.

The Woman’s Hour Power List 2020 was dedicated this year to honouring those women who – whether as decision-makers, innovators, communicators, campaigners or volunteers – have made a significant positive contribution to the environment and the sustainability of our planet. Among the 30 names in the list, two of these – lawyer Farhana Yamin (1983, PPE) and Jo Haigh (1972, Physics) are Somerville alumni.

The following biographical sketches are drawn from the Woman’s Hour Power List 2020 citations, with our thanks. 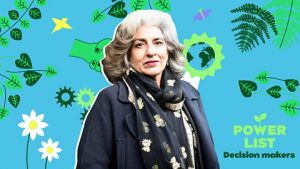 Placing at number two, second only to the Green Party leader Caroline Lucas, Farhana Yamin is “a powerhouse of climate justice” according to the Woman’s Hour judges. She has been advising leaders and countries on climate change and development policy for over 20 years, where her work as an Environmental Lawyer at the highest levels of climate negotiation is unparalleled.

Farhana was an advisor to the Republic of the Marshall Islands for the 2015 Paris Agreement. She played a key role in building the High Ambition Coalition, which advances the climate-positive work of 35 countries, and founded Track 0 to provide strategic training and advice to government leaders, businesses and communities trying to become more sustainable.

At present, she’s working to empower people to bring about the changes they want to see at a local level, including setting up the Think and Do Community Climate and Eco Action pop-up in Camden where people can discuss ideas. She wants to prove that individuals really do have power when they work together. 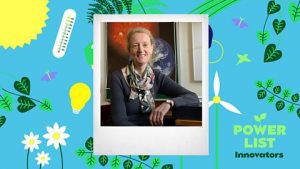 Placing at number seven in the list, Jo Haigh is described by those who know her as a champion of collaboration and an inspirational colleague. Building on these qualities – which may be familiar to those who remember her from Somerville days – Jo has been able to use her position and knowledge to have a positive influence on those in power.

It’s long been known that the Sun’s activity – usually seen in the form of sun spots – increases and decreases in 11 year cycles. These natural fluctuations were (and in some cases still are!) given as being directly responsible for global warming. Jo set out to see if this was true. Using data from satellites and modelling, she showed that variations in the Sun’s activity could not be the driver of global warming trends. Although we may feel the effects on Earth, they are extremely small. Sharing her findings has opened her up to abuse from those who disagree, but she persists in sharing her work, and the methods she’s developed are still used all over the world by climate and atmospheric researchers.

Speaking truth to power and cutting an unorthodox path: could there be anything more Somervillian?

We end by congratulating them both and wishing more power to them.