Reflections on the Birthday of John Stuart Mill

To mark today’s anniversary of John Stuart Mill’s birth, our Senior Research Fellow in History and acclaimed scholar of Victorian social reform and ideas, Dr Frank Prochaska (FRHistS) joins us to provide this reflection on the enduring significance and probable reaction to contemporary Britain of J.S. Mill.

On May 20th John Stuart Mill (1806-1873) would have celebrated his 214th birthday.  But it is a world changed out of recognition from that of his day.  Britain no longer has an Empire and continues to search for a role.  The East India Company, for which he worked for nearly 35 years, dissolved in 1874, a year after Mill’s death, and India would eventually become an independent nation with over a billion people.  From being the pre-eminent power in the nineteenth century, Britain has given way to The United States and China, while Europe, which in the Victorian years was disunited, and often at war, has become a federation of states with a common currency.

British politics likewise has also seen dramatic changes.  The growth of the party system in the late nineteenth century led to a systematic organisation of hatreds, while the Liberal Party for which he served as an MP in the 1860s gave way to the Labour Party.  He would take some comfort in the emergence of universal suffrage and particularly the granting of votes for women in 1918, which he advocated a half century earlier.  What he would make of the current state of British politics can only be imagined but there is reason to suggest that he would be alarmed by the tribalism, the ignorance of the voting public, and the growth in power of the central government.  He was singularly unimpressed by American politics of his era, which encouraged indifference in the electorate and mediocrity in the candidates.

What Mill would make of the corona virus is uncertain, but like his contemporaries he was no stranger to death, for life expectancy in England was 42 for a child born in 1850.  The constant threat of an epidemic was something Victorians lived with. Cholera, then little understood, was a principal cause of fatalities across the globe in the nineteenth century. In 1853-54 alone it claimed 23,000 deaths in Britain and 10,000 in London, out of a total population in Britain of 27 million. Economic crises were also endemic, and Mill lived through several, including the financial crisis of 1857 and the agricultural depression of the 1870s, which was caused by the fall in grain prices that followed the opening up of the American prairies.

It is easy to forget the continuities of British life given today’s trials and uncertainties; thus it is all the more important to cherish a writer like Mill, who retains a reputation for liberal sanity in our disconsolate world.  He was, as generally agreed, the greatest nineteenth-century thinker in the English-speaking world, a man who contributed so much of lasting benefit to social thought, political theory and political economy.  Somerville is most fortunate in being in the forefront of the study of this great thinker through the possession of his personal library.  It is entirely appropriate that his books are in the College, for he represents what so many Somervillians think about themselves: liberal, progressive and feminist.

Have you visited the John Stuart Mill Collection at Somerville? If not, make it a Must-See destination on  next trip to College. The collection comprises 1,674 volumes owned by J.S. Mill, some of which Dr Prochaska can be seen enjoying in this picture. 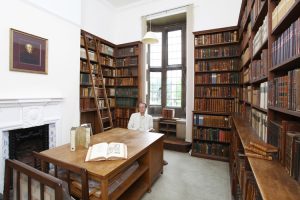