Principal’s Blog: Introducing a special Choral Contemplation for the people of Ukraine

The text that follows is a record of the address given by Somerville College’s Principal, Jan Royall, at a special Choral Contemplation containing music and readings for the people of Ukraine, including a two-minute silence and charity collection.

These are dark days for our continent and for our world.  I am glad that we have an opportunity this evening to show our solidarity with the people of Ukraine, to voice our total opposition to the war and to support those members of our community who are most impacted by the atrocities.  We deplore, as we always have done, any form of military aggression that denigrates or seeks to deprive individuals of their democratic rights.

Only by strengthening and advocating for the democratic rights of individuals, institutions and societies can we avoid the prolonged and tragic suffering that follows inevitably from one man seeking to undo the bonds of civic society. We strongly reaffirm our commitment to promoting a humanistic education that places human life and the protection of human rights at the core of its actions, and to respect the sovereignty and integrity of all states.

Somerville’s mission is education and on Friday night, at our annual Foundation Dinner, I quoted Kofi Annan, the former UN Secretary General who said: “Education is a human right with immense power to transform.  On its foundations rest the cornerstones of freedom, democracy and sustainable human development.”  These cornerstones are being ravaged just 1,500 miles away with the war in Ukraine. A despicable, unprovoked act of aggression on an independent, sovereign, democratic state resulting in death and destruction.  A million and a half refugees have already fled to neighbouring countries and millions more are desperate to escape.  This war, waged by a despot, will have a profound effect on our continent and our citizens.

I am proud of the way in which Somerville takes a stand at such moments.  Very occasionally there are issues of balance to be considered, but not in this case.  This is a war pursued by a wrathful, evil man, an autocrat who cares nothing for humanity and human rights, and is using similar tactics to the ones he used in Chechnya and in Syria to destroy towns and seize control.  He cares nothing for international laws and it is a travesty that Russia is a member of the Security Council.

The fact that our focus is now on Ukraine does not mean that we forget people suffering in other parts of the world, like Afghanistan, where people right now are starving, selling their kidneys and their children in order to feed their families.  Nor does it mean that we condemn the Russian people.  Our utter condemnation is for the Russian President and those who surround him.  Thousands of brave Russians have taken to the streets to protest and tens of millions will be against the war – or would be if they knew the truth.  But all independent media outlets have been shut down and propaganda rules the airwaves.  However, at this time it is right and proper that we do everything possible to help Ukraine and its people, and everything possible to ensure that the war does not bleed into neighbouring countries or, god forbid, result in the use of nuclear weapons.

The courage of the people of Ukraine is quite extraordinary. They are proud of their country and are doing everything they can to protect it from the military might of the Russian forces.  The Ukrainian self-defence forces are astonishing.

The pictures, the stories, the tweets bring the horror to our phones and our screens thanks to the determination of Ukrainians to get out the truth to the world, and thanks to amazing journalists working there.  We know that the Russians are lying when they insist that they are only targeting military infrastructure.  We have seen the evidence. But rather than feeling overwhelmed and hopeless, we should act – and we are acting. We must do everything we can to assist the Ukrainians who remain in their country and those who have escaped or are trying to escape.

I am proud of the things that our students are doing, and that we are doing as a community, to support the humanitarian appeal financially and to support the charities sending blankets, toys, winder clothing, first aid materials and much more to Poland and the other countries neighbouring Ukraine.  On Thursday of this week, the Somerville Music Society and the JCR are organising a concert to raise money and raise awareness and I am sure that there will be many similar events next term.  Yes, next term.  I fear that peace in Ukraine will not be restored for some-time and the suffering of the people will be immense.  The needs of refugees who are fleeing the country will be immense for months and years to come.

I hope that in due course we will be able to support Ukrainian academics through CARA (the Council for At-Risk Academics).  It was founded in 1933 by Britain’s foremost academics and scientists, in response to Hitler’s decision to expel hundred of leading scholars from German universities on racial grounds. The goal was ‘the relief of suffering and the defence of learning and science’.  Currently at Somerville we are supporting an academic from Yemen and his family, and together with other colleges we are about to welcome two Afghan academics and their families.  It takes a long time, far too long, to get academics and their families out of war zones and fragile states, but we will certainly assist as soon as possible.

I strongly believe that we have a duty to welcome refugees and that, as a country, we must fulfil our international obligations under the 1951 Refugee Convention.  I am political and never hide it, but in saying this, I am not being political.  The Nationality and Borders Bill was in the House of Lords for two days last week and a raft of amendments were passed taking out some of the most offensive parts of the Bill, including those which offended against our International obligations.  The debates were not partisan and the most damning speeches came from very senior lawyers, former permanent secretaries and from the Bishops.

As a College of Sanctuary, we will certainly do our utmost to help support Ukrainian refugees who find their way to Oxford, and to support local charities working with them.

One of the most important things that we can do at this difficult time is to support each other, to look out for members of our community, especially those from Ukraine, from neighbouring countries and from Russia.  So many Russians have family and friends in Ukraine.  In addition to concern about friends and families, it is so hard to make sense of what is happening and we need opportunities to discuss these difficult issues.  I know that Professor Natalia Novaskowska, who is Polish, is going to organise coffee on Wednesday for students and staff from Central and Eastern Europe, who will have found the last few days very hard.  And there will be other supportive coffees and discussions over the coming weeks and months.

In the meantime, we must not give up hope or our determination to do whatever we can as individuals to bring about change in this world.

This evening, however, I would like us to think about the people of Ukraine as we listen to the beautiful music and words, and to spend a couple of minutes in supportive silence with the brave, innocent citizens who are the victims of an appalling humanitarian crisis. 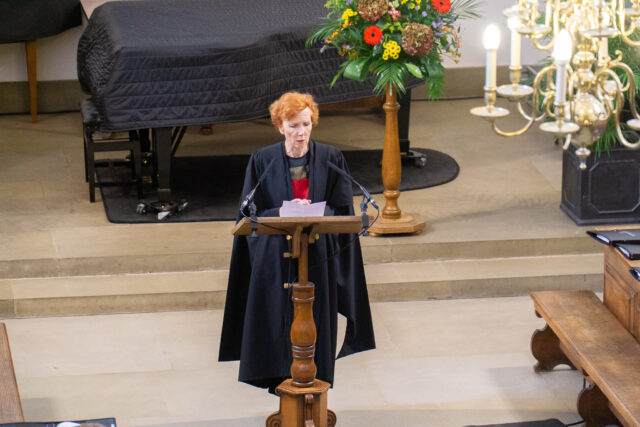