One Day in History for Holocaust Memorial Day: 15th April 1945, Bergen-Belsen, and doing science in hell

For this year’s Holocaust Memorial Day theme of One Day, we look back on the day when the soldiers of the British 11th Armoured Division liberated the Bergen-Belsen camp. They were soon joined by our future Principal Janet Vaughan at the head of a Medical Research Council team. Their mission was to save the lives of the camps surviving inmates, who were ravaged by starvation and disease, and were distrustful of medical interventions after their experiences at the hands of the Nazis.

Bergen-Belsen camp was created as a camp for Allied prisoners of war in 1940. In 1943, the SS took over management of a portion of the site, converting it eventually into a concentration camp. It was composed of numerous camps, with three main components: the POW camp, the “residence camp”, and the “prisoners camp”. The residence and prisoners camps had multiple subcamps, including a large women’s camp from January 1945. 50,000 people are estimated to have died in the camp complex, most of them Jews – including the diarist Anne Frank and her mother Margot. 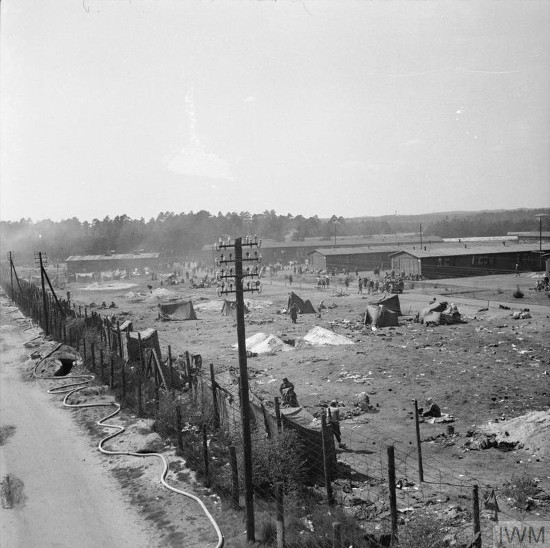 A view of the liberated Camp from a lookout tower, Copyright: © IWM. Original Source: http://www.iwm.org.uk/collections/item/object/205293711

During the course of its operation, Bergen-Belsen incarcerated Jews, POWs, political prisoners, Roma gypsies, designated “asocials”, criminals, Jehovah’s witnesses, and homosexuals. As the Germans retreated west, it became a collection camp for thousands of Jewish prisoners evacuated from sites nearer the front line. Numbers increased from 7,300 prisoners in July 1944 to 60,000 by April 1945.

This sudden influx of new prisoners overwhelmed the meagre resources of the camp, leading to widespread starvation. By early 1945, prisoners would sometimes go without food for days, and fresh water was also in short supply. There were only a few taps and latrines to go around the tens of thousands of prisoners, and combined with the crowded conditions this led to savage outbreaks of disease such as typhoid and dysentery, killing many of the inmates.

The scene that British soldiers discovered on April 15th defied belief, and even sanity. Thousands of bodies lay unburied around the camp and some 60,000 starving and mortally ill people were packed together without food, water or basic sanitation. 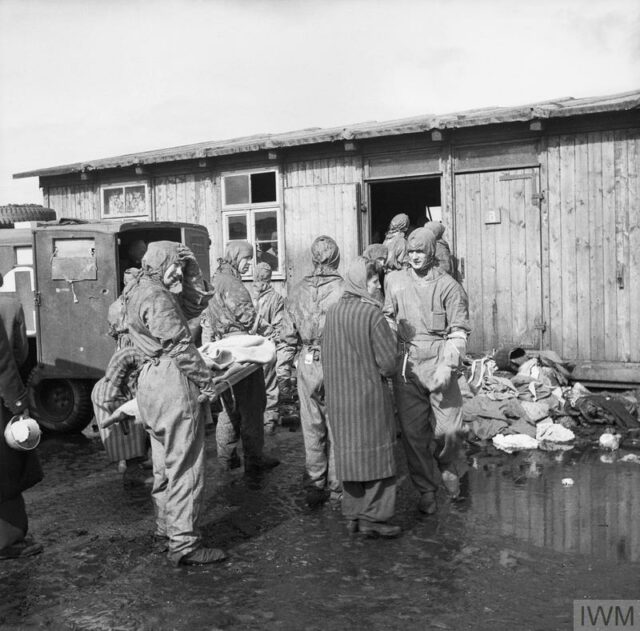 Army medics wearing protective clothing to limit the spread of infectious diseases evacuate inmates from one of the huts at Belsen. Copyright: © IWM. Original Source: http://www.iwm.org.uk/collections/item/object/205194158

It was into this theatre of atrocities that the young Dame Janet and her team of 100 medical students would shortly enter, and where her innate empathy and clinical understanding of starvation would be tested to the limit.

Prior to her arrival, the British Army’s efforts to recuperate the starving prisoners had been fatal. Feeding the survivors on ‘compo’ rations – the stodgy diet of tinned meat, vegetables, fruit, puddings, butter, cheese and jam designed to sustain active soldiers – caused a renewed outbreak of illness among the inmates as their shrunken, weak intestines tragically were simply unable to digest such rich fare after months of starvation. It was later estimated that 2,000 people died as a result of being given this initial, wrong diet, and over 13,000 of Bergen-Belsen’s inmates in total died after liberation due to their ordeal. 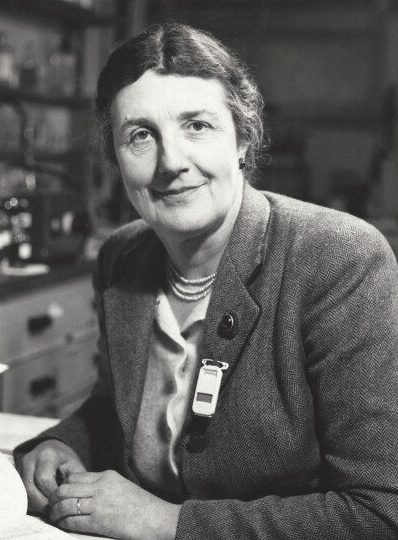 Janet Vaughan’s goal was to discover whether a new product called hydrolysates, a concentrated protein preparation, might offer a viable lifeline to the starving inmates. She would later describe the experience as like ‘practising science in hell’.

The experiment did not go as planned. The hydrolysates, which were supposed to be administered orally, nasally or via IV drip, were intolerable to most inmates, either due to their horror of injections following Nazi torture or because they could not stand the highly unpalatable taste. And yet, despite this setback, Vaughan was undeterred.

Having recognised the failure of the hydrolysates, she proceeded to find alternatives. Subsequent attempts to use the Bengal Famine Mixture, first pioneered during the Bengal crisis of 1943, were also unsuccessful, and it was only with the adoption of milk and very small quantities of food administered orally, that progress was eventually made. 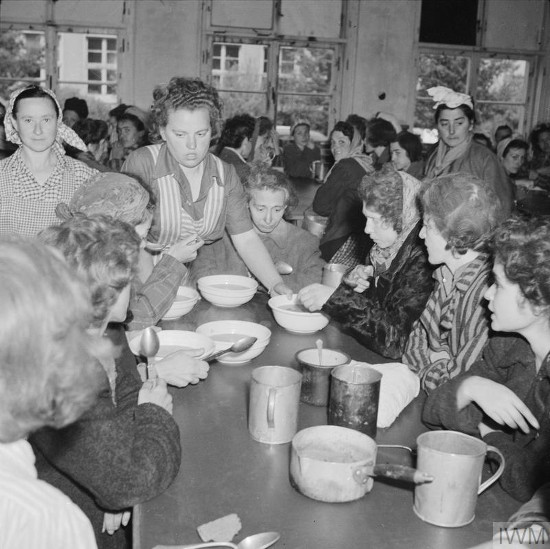 Women inmates enjoy a meal of hot soup in one of the huts. Copyright: © IWM. Original Source: http://www.iwm.org.uk/collections/item/object/205194184

Dame Janet returned to Britain in late May of 1945 to present her findings to the Royal Medical Council, leading the Medical Research Council to halt the production of hydrolysates. Shortly afterwards, she returned to Somerville to take up her post as Principal of the college and embark on a long, illustrious career of research and public service dedicated to enabling other women, like herself, to change the world. Like many men and women of her generation, she would speak rarely if ever about her wartime experiences and what she saw – and yet, in a 1984 interview with Polly Toynbee, she would comment that it was the basic goodness of ordinary people which kept her going.

In autumn of 1945, a British Military Tribunal in Lüneburg tried 48 members of the Bergen-Belsen staff, including 37 SS personnel and eleven prisoner functionaries. The tribunal sentenced eleven of the defendants to death, including camp commandant Josef Kramer. Nineteen other defendants were convicted and sentenced to prison terms; the tribunal acquitted fourteen. On December 12, 1945, British military authorities executed Kramer and his co-defendants.

Once the final inmates were evacuated, the camp complex was burned to the ground in order to contain the spread of Typhus. After a public outcry about the lack of a memorial, the British Government began the process of creating one in September 1945, which was inaugurated in 1952. In 2007, a new memorial centre opened, allowing visitors to see the outline of the camps for the first time since they were destroyed. 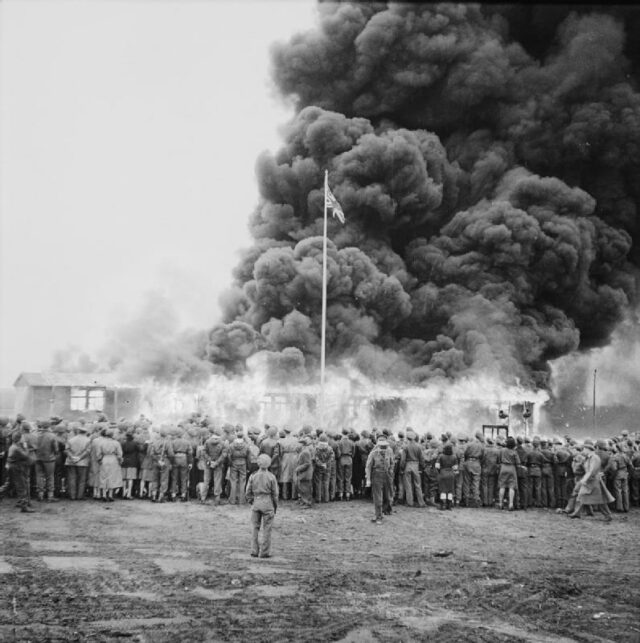 Crowds watch the destruction of the last hut at Belsen two days after the camp was finally evacuated. The hut was set on fire by a British flamethrower. Copyright: © IWM Original Source: http://media.iwm.org.uk/iwm/mediaLib//37/media-37172/large.jpg

Some of the facts in this article were sourced from the US Holocaust Memorial Museum’s Holocaust Encyclopaedia, found at https://encyclopedia.ushmm.org/content/en/article/bergen-belsen