It is with great sadness that we note the passing of Miss Mary Jane Hands, our former Treasurer and a long-standing and devoted Fellow (latterly Fellow Emerita) of the College.

It is not easy to summarise the profound impact Miss Hands had upon Somerville, because it came in so many forms during her long and fruitful relationship with the College. One might mention the seminal role she played in employing many of the College’s longest-serving members of staff, the invaluable financial advice she gave on College investments, or the tireless efforts she made on behalf of the Somerville nursery, not only by selecting a building and securing the necessary funds, but also by supporting the nursery’s day-to-day management. Whatever the task, her very considerable energies were always directed to the overall good of the College, whose well-being was a matter of deep personal concern. 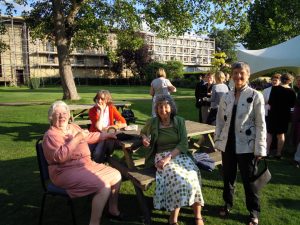 However, it was perhaps in her ability to act as an expert and pragmatic guide, assisting in the translation of vision to reality, that Miss Hands left her most enduring legacy at Somerville. Working alongside four Principals from Janet Vaughan to Catherine Hughes, Miss Hands made vital contributions to four major building projects – Vaughan, Margery Fry, Wolfson and the Dorothy Hodgkin Quad – across everything from selecting architects to sourcing funding and, in the case of the Dorothy Hodgkin Quad, masterminding the project. In doing so, Miss Hands helped secure the standing of Somerville through visible and enduring expressions of the College’s cultural capital at a key juncture in its development.

In addition to her work for College, Miss Hands will also be fondly remembered for her tremendous personality, which was invariably forthright but also warm and generous to a fault. Always passionately invested in life, Miss Hands maintained a range of passions that extended from fast cars and travel to horse-racing, Yorkshire terriers, salmon fishing and silver – the latter of which led Miss Hands to gift a beautiful set of silver flatware to Somerville. Many will have fond memories of Miss Hands on her daily walks around the Quad with her dog, Muffin, who didn’t always approve of what the pair encountered.