Naiza Khan: From Manora Island to the Venice Biennale

Naiza Khan (1987, Fine Art) became the first British-Pakistani artist to show at the Venice Biennale and its inaugural Pakistan pavillion this summer. She reflects here on her exhibition ‘Manora Field Notes’, a contemplation of the landscape, history and present of Pakistan’s Manora Island in sculpture, film and sound; and how her time at Somerville laid the foundations of her craft. Manora occupies a fascinating geographical and temporal location. It’s perched on the edge of Karachi, a densely populated industrial metropolis. The island is a counterpoint to that in many ways; it has a slower pace and smaller community. That community is very diverse, with Sufi shrines, a church, a Hindu temple, and a Sikh gurdwara all to be found there.

It has been conflicted and contested over 1000 years, serving as both a defensive fort and a harbour. It was the sentry post of the British colonial base in Karachi, and still has colonial structures like the lighthouse (the tallest in Pakistan). Today, it’s again home to a military installation in the form of a naval base. It’s no longer truly an island though; a spit joins it to the landmass.

I began visiting Manora in 2007. A lot of money had been invested the year before to build a resort in the area, but after the worldwide financial crash in 2008 many of the KPT (Karachi Port Trust) workers were given a golden handshake and the plans scrapped. I would come across buildings with signage explaining they were marked for demolition, but left with the job only half done and the plans now abandoned. The project started by documenting these strange modern ruins.

Manora featured directly in Venice through Sticky rice and other stories. Sticky rice consists of a filmic installation, each projected as a kind of diptych. The idea was to encounter two different narratives, with one screen capturing an interview or interaction I’d had and the other showing the island at the same time. One of the films showed my discussion with several artistans about creating models of various historical boats from the region. The other was an interview with a man who makes telescopes from old binoculars. Both were accompanied by shots of the harbour; the beach; a man slowly pushing a cart full of the model boats along the shorefront, the wheels carving lines on the sand. It was important to me not to over-aestheticize the experience and to make sure that these voices would be heard in Venice on their own terms. I am not trained in using moving image and this is the first time I have worked intensively with film, which I think lent my work a certain honesty. There was a directness to my approach, in the way I recorded my conversations with different people and chatted with them.

I was trying to let the voices speak out and to show the nature of the subjects I was working with – it was a conspicuously non-glitzy approach. There is sometimes a lot of aestheticization or ego about how country pavilions can be played out at the Biennale. You can push the ideological button or the national button and really overkill the attempt to represent your country. My curator and I were conscious to avoid that. I wanted to create a very small window for audiences in Venice, a bridge between the two places.

Preparing for the Biennale show was rigorous. I was working 15-18 hours a day for the months leading up to the show, and then the Vernissage was also an intensive time to engage with audiences visiting the Biennale.  We shipped over 300kg of brass objects from Pakistan, all made by craftsmen from an artisanal community in Golimar, Karachi. We hosted a press conference, collectors, the Tate patrons, the Hayward Gallery patrons, amongst others.

I was so involved in the process that I didn’t really have time to ponder on how the work would be received until the audiences arrived. I was overwhelmed by the response and the conversations I shared, the way people were moved by the directness of the works and the connection they felt. I had thought that maybe just a handful of people would understand the installations and appreciate them! The experience was incredible.

I had a very intense studio practice prior to 2008, but once I began visiting Manora my work did a very fast turnaround. Being outside of the city turned my lens outward in a sense, and that’s what led me towards working with sound and film as well as brass sculpture.

One thing that has remained constant in my art is the idea of embodiment. My engagement with the island and the geography I was walking through was very much processed through my own subjectivity as a woman and an artist. The physical act of drawing lines with my body across the island, the conversations I had with people as I sat at a tea house – this all fed into the work.

I also research my ideas and work intensively. Sometimes that means visual research, and also spending time reading around my subject or discussing ideas with academics and artists. Poetry has always been a way of finding that gesture in the work. In Oxford I was reading people like John Ashbury, Ezra Pound, as well as poets from the Middle East and South Asia, like Mahmoud Darwish and Faiz Ahmed Faiz and earlier Sufi poets. Now that I’m in a post-graduate research programme at Goldsmiths, I find myself doing more structured academic reading.

But that’s not to say that I believe in hierarchies of knowledge. The thoughts of scholars are as important to my work as the knowledge of the telescope maker in Sticky Rice, or the artisans who cast the brass works like Hundreds of Birds Killed. And I produce knowledge in my own way through my art. The more I work with different mediums and artisans, the more I speak to people, the more meaningful and significant this process of gathering knowledge becomes in my work. 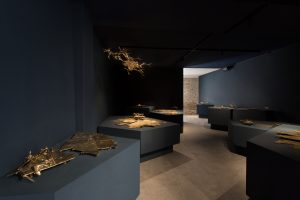 At Somerville, this research was intuitive. I used to look at scholars and philosophers from Asia; I used to look a lot at Japanese woodcuts; I would sit in and do research in the Bodleian’s Eastern Art Library, peering at artists’ books and seeing how they brought together text and image. The Ruskin gave us the space to have multiple exposure to the theoretical, both through the minds that came to teach us and the resources on offer in the rich archives and books. I used to spend long hours in the printmaking studio, where I was inspired by Jean Lodge’s technical and conceptual approach to her work. She had that belief that you had to listen to other voices and be plural in your kind of engagement, which has become so important to my method.

That’s what Oxford meant to me in many ways: a space where you speak about your own positionality and where you’re coming from as an artist at the same time as learning from other people. I had a very different experience of life and art because of the people I met and the empathy we shared. Somerville is where it all began.

What would I say to artists studying at Oxford now, and to Somerville’s students? Keep your antennae open. Absorb everything and never narrow the possibilities of what can come.

And I can’t stress this enough – get your feet on the ground. Fieldwork is so important. It’s almost an injustice even to make decisions about people and places based on second-hand knowledge, or not to try and access the voices that are coming out from the region you are focusing on. These people are living the realities that you are theorising after all. You can’t legitimise what you’re doing unless you put your finger on the pulse.

As for myself, I feel I’m ready now to take the methods and ideas I’ve learned from the Island in the past 12 years to new ground. That said, I would love to share this new body of work with audiences in the UK if the right opportunity presents itself.