The proportion of state school educated pupils among Somerville’s UK undergraduate intake is expected to rise to 69%, based on A-level results out this month.

Excluding overseas and EU students, 69.1% of this year’s new undergraduates were educated at state schools or sixth form colleges.

The proportion is up from 2018, when 63.6% of Somerville’s UK undergraduate intake were from state schools.

The increase follows a determined effort to widen participation at Somerville, which includes hosting UNIQ and Universify summer schools and the Demystifying Oxford Interviews Day, a day of interview preparation for state school applicants.

“At Somerville we provide a world-class education and we are determined to extend the benefit of this education as widely as possible.

“I would like to congratulate all of our successful applicants, from both state and private schools.

“I look forward to welcoming you to Somerville and trust you will flourish here.”

Somerville will take part in the university-wide Opportunity Oxford initiative, starting next year, which will provide additional support for pupils from disadvantaged backgrounds. This will include structured study at home and residential study at Oxford.

The College is also supporting Oxford’s plans to launch a Foundation year for teenagers from deprived backgrounds.

The next University of Oxford open day takes place on Friday 20th September, when you can visit departments and colleges including Somerville. This gives prospective applicants a chance to discuss subjects with our tutors and form an impression of life at Oxford. 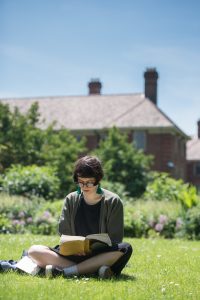