Modern Challenges to the Rule of Law: Lecture by Gopal Subramanium

Distinguished jurist Mr Gopal Subramanium  was the youngest lawyer to be designated a Senior Advocate by the Supreme Court and has appeared as lead counsel in a number of landmark cases. One of Mr Subramanium’s most important contributions to legislation in India was to improving India’s sexual violence laws.

Mr Subramanium, a former Solicitor General of India and a Senior Advocate of the country’s Supreme Court, has endowed the Gopal Subramanium Scholarships that funds postgraduate study of Indian legal policy. In December 2018, he supported the Somerville college choir’s tour of India which featured concerts and workshops with disadvantaged children in Mumbai and Goa.

In November, Mr Subramanium delivered a lecture at Margaret Thatcher Centre in Somerville College titled ‘Modern Challenges to the Rule of Law,’ exploring the linkages between democracy and the rule of law, as well as a psychological approach to the rule of law.

Here are some excerpts from the lecture:

“Liberty is the most precious jewel under the sun but the question asked throughout history is: how best to preserve it? The arms of the State are long and wide. They would not easily admit to wrongdoing. It is the fundamental nature of the discourse in a State and the manner in which society looks at the State that will ultimately make the difference. The State and the institutions that make it up ought not to be regarded in a spirit of blind, grateful co-operation but with an inquisitive and relentless mistrust of power, a concerted effort to seek constitutional justification at all points of time.”

“The Judiciary must see its power as sacred and as requiring to be exercised on the basis of reason alone. It must tread with great humility in all circumstances. The phonetics of power do not sit well with judges. Judges must be conscious that there are cases of difficult nature; cases which seem to arise in relation to one subject-matter while impacting others not on the radar. I have come to believe that the danger of using Judicial Power for an ‘extraneous purpose’ whether willingly or unwillingly is no longer an impossible danger.”

“A judge must not only be a judge but look the part in every respect: in his carriage, in his commitment to learning, in his respect for the bar and the litigant and in the self-awareness and helplessness of being – like all men – fallible.”

The full paper can be downloaded from the link below: 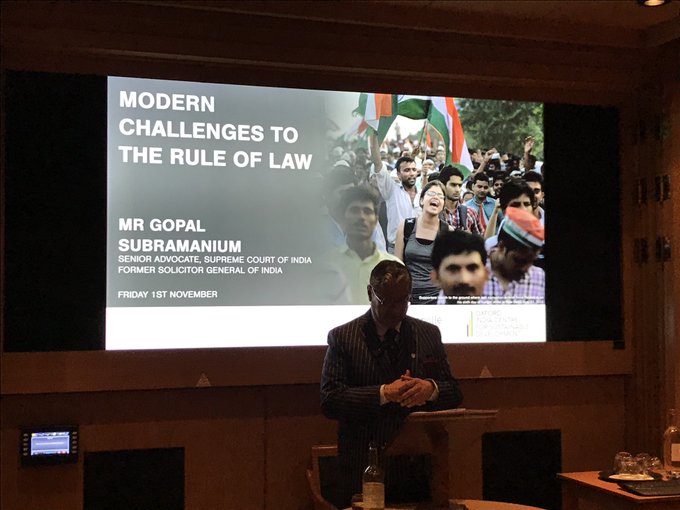