Megan’s work was selected to receive the top prize of £2500 from among 70 entries from undergraduate and postgraduate students across the university by a panel including Liz Truebridge, the Executive Producer of Downton Abbey, and chaired by Man Booker International Prize 2016 panel chair, Boyd Tonkin.

The authors, he said “were bold.

“They were inventive. They took risks. They bent rules. They showed that fiction, even short fiction, really is a garden where a hundred flowers can bloom.”

“Winning the inaugural Oxford-BNU Award for Creative Writing came as a wonderful surprise and a timely encouragement! I believe that there is a place for women in sports literature, and it is affirming to now know that others agree with me.

“It was a joy to write about nature, landscape, belief in God, and sport. I find that these things are intimately connected and bring me life. I hope that these stories provide similar life for readers and that they inspire women and girls to have the confidence to enjoy sport.

“This award is a blessing, and I am very thankful.”

The Oxford-BNU Creative Writing Award was initiated by the Mo Yan International Writing Centre, which is based at Regent’s Park College, in June 2019. It is named for 2012 Nobel Laureate Mo Yan, who is an Honorary Fellow of Regent’s Park College, and aims to facilitate international and cross-cultural diversity within the global literary community. Uniquely, the award is offered twice in parallel competitions, held simultaneously in Oxford and Beijing Normal universities.

To take part, entrants must submit an original short story of up to 10,000 words on any topic and in any format. As well as the first prize of £2,500, runners’ up awards of £500 are also made. The winning short stories will be published by The Oxford Prospects and Global Development Institute. 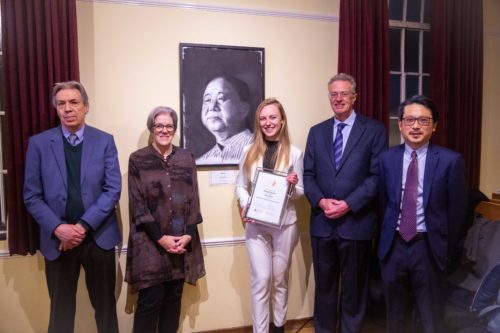