We are saddened to share the news of the death of our Honorary Fellow, Alumna and the oldest living Somervillian, Joyce Reynolds, at the age of 103.

Joyce will be remembered both as a brilliant scholar who became the first woman to win the Kenyon Medal for Outstanding Achievement in Classical Studies; and, during her long tenure at Newnham College, Cambridge, as a rigorous, and inspiring educator. She taught a number of eminent classicists including Dame Mary Beard, who discussed her fond recollection of the power of Reynolds’ teaching and the firmly sceptical approach it encouraged (‘Do you really know that, Miss Beard? Is that the only way you can interpret the evidence?’). One of our favourite recent memories of Joyce was when we had the privilege of hosting her 100th birthday lunch in Radcliffe House. Joyce gave a short speech to the gathering of her peers and former students, talking about the role Somerville had played in her life. And, of course, there was cake: 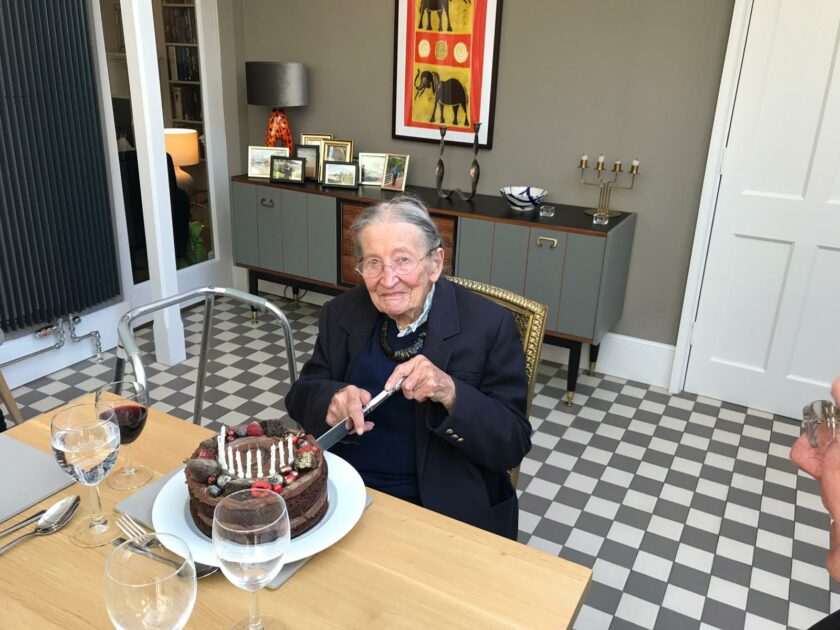 Born in 1918, Joyce came to Somerville in 1937 to read Classics. After graduating, she went to work for the Board of Trade for the rest of the war. What she learned there about the levers of government would go on to influence her glittering academic career focused on the ancient Roman world. In 1945, she won a research scholarship to the British School at Rome. She quickly became the leading expert on Roman inscriptions and the workshops that had produced them (particularly inscriptions from the Greco-Roman city of Aphrodisias, now in modern Turkey), using them as a springboard to explore historical questions about Roman government and the relationship between the imperial centre and the provinces.

She took up the role of Director of Studies in Classics at Newnham College, Cambridge and in 1957 she was appointed to a Lectureship in Classics at Cambridge University. In 1982 she was made a Fellow of the British Academy. She was Reader in the Epigraphy of the Roman World at Cambridge in 1983-4. Reynolds is a Gold Medallist of the Society of Antiquaries and Fellow of the British Academy. In 2017, aged 99, she was awarded the Kenyon Medal for outstanding achievement in Classical Studies and Archaeology, the first woman to do so.

She will be sorely missed by both the Somerville community and the wider academic world.

In 2017, we interviewed Joyce (then aged 99) for our Magazine. You can read the feature below: