Vanshaj Jain, DPhil candidate in the Faculty of Law at the University of Oxford and an Oxford-Indira Gandhi scholar at Somerville College, recently submitted his DPhil thesis titled ‘Boundaries Adrift: Entitlements and Delimitation in Shifting Seas’ and passed his viva examination without corrections.

It all began with an interest in borders, which grew into a novel thesis on the Law of Sea and maritime boundaries. As per the United Nations Convention on the Law of the Sea, a baseline is line along the coast from which a country’s right to seaward boundaries and jurisdiction is measured. Sea-level rise causes these baselines to shift, and therefore causes maritime boundaries to fluctuate. Vanshaj’s thesis makes a significant contribution to legal scholarship on the Law of the Sea by engaging with long term data sets on tidal patterns of coastal states, which can be used to predict the movement of baselines along the coast and stabilize maritime boundaries. He outlines a plan of action that vulnerable coastal states may follow to enhance the resilience of their maritime claims within the existing framework of the law.

Excerpts from an interview with Vanshaj below, on what led him to research the Law of the Sea, current developments in international law, the benefits of interdisciplinary research and the importance of this field to India and other countries vulnerable to climate change’s effects.

It is now common knowledge that one of the alarming effects of climate change is rising sea levels and the flooding/submerging of low-lying coastal areas and small island states. In what ways does this issue need urgent attention in international law? How does your PhD research in particular approach the problem of sea-level rise?

My PhD is specifically about the Law of the Sea, which is a subset of international law dealing with the rules that govern the sea and oceans. Within this, my research looks at the law that governs maritime entitlements and delimitation. The oceans are divided into zones of jurisdiction. It is not like land, where you have specific demarcated pieces of territory. In the ocean, you have different zones of jurisdiction such as the Exclusive Economic Zone, the territorial sea, the continental shelf – where your rights are slightly different, but more importantly the location of those zones and boundaries are determined by the location of the coast. Now the reason that is important in the context of sea level rise is that if the coast shifts, it means all of those boundaries become unstable, they fluctuate, the coastal state no longer knows which maritime resources they have access to, which waters they have jurisdiction over, as a vessel going through those waters you don’t know which coastal state has the powers to arrest you. This is the fundamental problem that my thesis tries to address. The problem with the literature on this subject is that it assumes that you will have new treaty for the Law of the Sea that will address this problem of sea level rise and baselines. But there are a number of reasons why I don’t think that a new treaty will materialise. This is mainly because maritime jurisdiction is a zero-sum game – what one state loses, the other state will gain. So, the states which have the most to lose tend to be countries that are not very economically and politically powerful, and the ones that have a lot to gain have a lot of political sway. Since a new treaty seems unlikely – my thesis tries to ask: what can we do with existing rules? What can we use from within the framework as it exists to try and stabilise this movement?

Can you tell us a bit more about who the winners and losers would be while delineating maritime boundaries?

There are definitely winners and losers in general in climate change – within the Law of the Sea, you will be the biggest loser if you have a large claim over maritime space and you are going to suffer a lot of sea level rise. If you are an island, you have uninterrupted claim of sea with 360 degrees of continental shelf to claim, and no neighbouring coastal states. But it also means that the island is highly vulnerable to sea level rise as there is more maritime space to lose. It creates this unique problem where a lot of your resources and economy depends on access to the sea, you have a lot of access to the sea but all that access is extremely vulnerable. That is also why within the context of maritime entitlements, low-lying states like Bangladesh, and parts of China and India, are also vulnerable.

Your thesis places an emphasis on resilience – how does international law approach this concept?

Resilience, adaptation and mitigation are the big lenses we use to look at climate. But these terms are loosely defined and their meaning is very context dependent. We use resilience and adaptation almost always to look at physical and real systems like how it impacts society, how it impacts the coastal state and physical structures. My thesis tries to apply the concept to the law – a social construct and not a physical construct. So I don’t look at how we change rules – that would be adaptation. Instead I look at how we can strengthen the rules that already exist. Because of the way politics works in international law, you can’t always create new rules with speed. That’s why resilience in the study of international law is important. 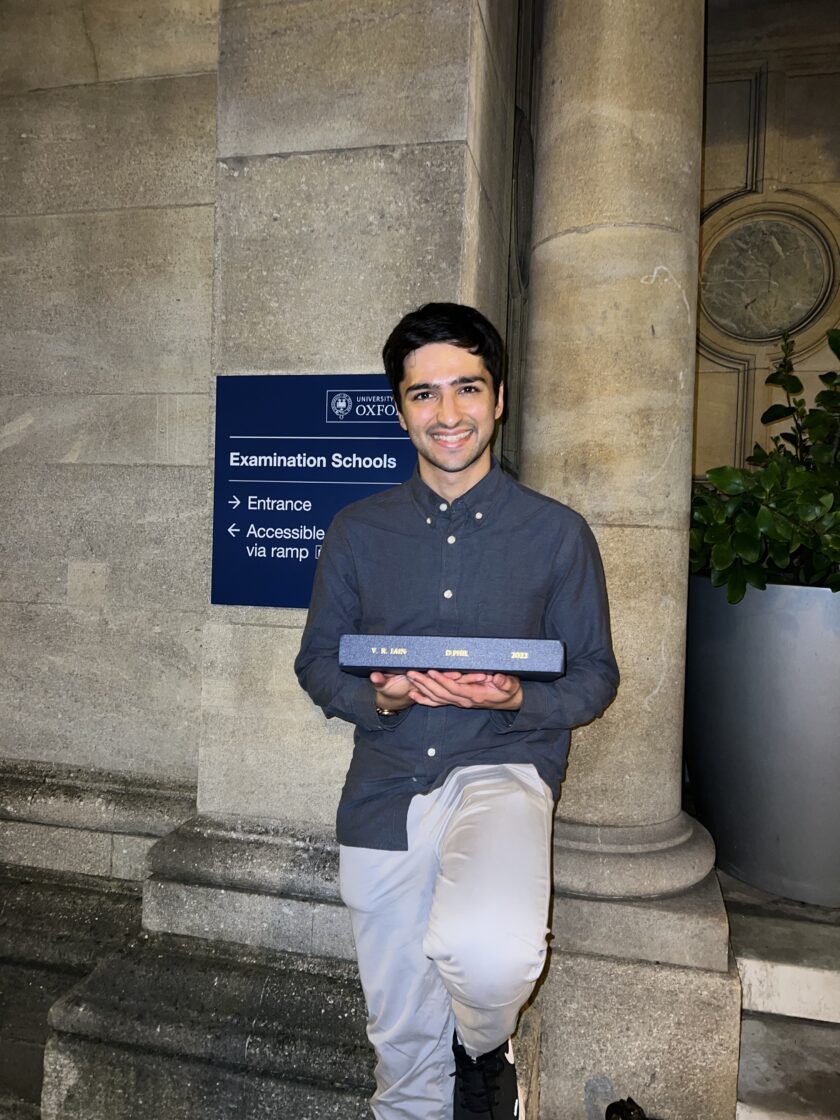 How did you arrive at this topic of study?

I’ve always been interested in borders. During my MSc in Refugee studies at Oxford, I looked at this rule called uti possidetis which was the source of freezing colonial boundaries, and how the freezing of boundaries caused instability in the areas where it was applied. I specifically looked at the context of Punjab. Just the year before, during my Bachelor in Civil Law degree at Oxford, I read about similar proposals to freeze boundaries in the context of the Law of the Sea. It seemed obvious to me that there’s so much history on why this freezing of boundaries would produce more instability and scholarship in the Law of the Sea was not acknowledging it. So it was a fusion of those two interests, along with the realisation that this is an interesting, relevant area to work on with laws developing rapidly around it.

Is international law increasingly paying attention to climate change and its effects? Who are some of the scholars, writers whose work in this field you really admire?

Yes, absolutely. Infact, there were three books published on the topic of my thesis in the same month that I was planning to submit my dissertation. So it was very difficult to submit as there was new information, arguments and perspectives constantly being published. A lot of the initial literature on international environmental law dealt with broad debates on climate change and international law but especially in the last 4-5 years, we’re seeing specific issues being dealt with in depth, be it the Law of the Sea, statehood or migration studies. We have specialised books coming out that address very discrete but important issues about how international law is affected by climate change.  For general reading on international environmental law, I would recommend the work of my supervisor Catherine Redgwell and also Lavanya Rajamani. More specifically on migration and statehood, I recommend Jane McAdam. On the Law of the sea, Alfred Soons is a well-known scholar.

Did much of your work require deeper engagement with geophysical sciences in addition to law? How was it interdisciplinary in nature?

For very specific issues, I did have to familiarize myself with subject outside the law. For example, in the second chapter of my thesis which deals with the normal baseline, I had to read up on this concept called tidal datums which lies in the field of Geodesy. So I had to look at how nautical charts are drawn – which was very new and interesting to me. But I also found that it gave me new arguments and texture to my analysis which was lacking in a lot of the studies that I was reading. One of my main arguments was about how no one has noted how tidal datums (an approximation of where the water level intersects the coast) are calculated within the law, because that field of calculation lies outside the law. Some countries use data sets of 100-plus years to calculate their tidal datums, which gives valuable opportunities to defer the impact of sea-level rise.  Understanding these calculations opens up possibilities of what you can do – and that is why it is important to do this interdisciplinary work.

This is the first part of our in-depth interview series with the Oxford India Centre for Sustainable Development scholars.