How Shakespeare used pronouns with attitude

Professor Louise Mycock, Somerville’s Fellow and Tutor in Linguistics, delves into the Pronoun Tag construction with the help of playwrights Shakespeare, Marlowe and Jonson. 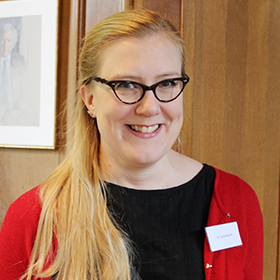 My interest in the pronoun tag – or ProTag – construction began with a straightforward question from a colleague.

“Why do you do that?” “Do what?” “Add a pronoun at the end of a sentence.” I soon added some questions of my own: how does this construction work, and why is it used?

Most speakers are aware that it’s possible to add an extra expression to a clause in English, such as “It’s useful, isn’t it?” or “He likes me, doesn’t he?”. This is known as a tag.

Some speakers of English also use pronouns as tags: “It’s useful, that” or “He likes me, him”. This ProTag construction is a feature of my dialect of British English – and possibly yours too – but it has been the subject of relatively little research.

After investigating the ProTag construction in Present Day British English, I decided to look at whether ProTags were also used by speakers of earlier varieties of English in a project funded by the British Academy and the Leverhulme Trust.

ProTags are predominantly a feature of spoken English and are not written down, and as such represent a challenge for historical studies.

The best approximation available to us is text from dramas of the time so, together with my research assistant James Misson, I searched the works of Ben Jonson (1572–1637), Christopher Marlowe (1564–1593), and William Shakespeare (1564–1616) for examples.

Our focus was on personal pronouns in the nominative case (such as I, thou, and she), which was the default form for pronouns in the Early Modern English spoken in Shakespeare’s time, and demonstrative pronouns (such as this and that).

We pored over the text of every play attributed to these three playwrights, a total of over 1.4 million words. We found just 122 examples, showing that ProTags were relatively rare, which is in line with my earlier findings for Present Day English.

Adding a single pronoun to a sentence doesn’t fundamentally change its meaning, so why include it at all?

The answer to this question goes to the heart of what it means to communicate with each other: the ProTag construction is one of a number that speakers may use when expressing their attitude to what they are saying and/or to the person(s) with whom they are interacting.

For instance, this is how one of Shakespeare’s characters expresses a negative attitude:

“I doe not like these seuerall Councels, I.” – William Shakespeare, Richard III

Then there is the use of the ProTag construction when attacking or insulting another:

“you are a foole, you,” – Ben Jonson, Poetaster

ProTags do not always have a negative function. In one of Jonson’s works, a tailor, in response to a compliment about the quality of his work, builds rapport with other characters by jokingly understating his ability to satisfy his customers. He says:

“Nay, we have no Art to please our friends, we.” – Ben Jonson, Every Man Out of His Humour

After exploring some of the ProTag construction’s history, my next project (supported by an award from the John Fell Fund) seeks to identify in precisely which English dialects and in which other languages this construction appears, and in doing so to return to my colleague’s question: “Why do you do that?”