Henry Francis Pelham (1846-1907) was one of Somerville’s founders and a passionate champion and supporter of the fledging college and of women’s education. Our Principal Jan Royall marks 175 years since his birth by taking a closer look at the contribution he made to the college. 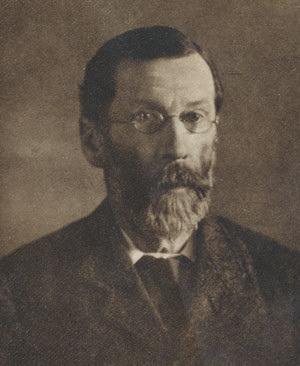 Henry Francis Pelham was a truly remarkable man. A great scholar, he also possessed shrewd judgement, extraordinary vision and determination. He was also audacious: not only was he an advocate for the education of women at Oxford, he also gave generously of his time and practical help. It must have taken great courage at a time when so many of his fellow scholars were uncomprehending, even hostile to the idea.

Professor Pelham was a member of the founding committee of Somerville Hall. The original committee for the founding of a women’s hall was established in 1878, but there was a split between those who favoured an Anglican affiliation and those who opposed it. He was in favour of a non-denominational foundation and I am delighted that his view prevailed. The aim was to create a college in which no distinction would be made between students on the ground of their belonging to different religious denominations. We are proud that Somerville was founded on this principle of religious freedom, a testament to our enduring value of inclusivity, and that it was named after a scholar, Mary Somerville, a Scottish mathematician and scientist whom the committee admired greatly, not least for her belief that women should have equality in terms of suffrage and access to education.

When Somerville Hall was established, there were just twelve students and lectures were held in rooms above the bakery on Little Clarendon Street. Henry Pelham understood the need for the Hall to secure permanent premises and to grow. It was under his stewardship as Treasurer of the Building Fund that, less than a year after the hall had opened to students, Somerville made an offer for the freehold of Walton House. Accepted by St John’s College, it took Somerville six years to raise the necessary funds but it meant that the new hall was able to expand its premises without interference – a great tribute to his fundraising skills. Pelham was also a shrewd Treasurer and helped initiate a system of sinking funds to repay building loans.

He was generous benefactor who subscribed to the hall and donated to the building fund. Among the gifts he made to the college were books and funds for books, pictures, furniture and furnishings including for the college library and, perhaps most unusual of all, in 1896, a belfry and bell for the new north wing of House.

This was a time of real growth and expansion which included being the first women’s hall to appoint its own teaching staff in 1894; the first to introduce entrance examinations in 1891, the first to build a library in 1903 and, in 1894, the first of the five women’s halls in Oxford to adopt the title of ‘college,’ officially changing its name to Somerville College.

Apparently, Pelham took a special interest in the development of the library and he rarely visited without pulling out of his pocket some book which he had brought as a gift.

Our glorious library remains a jewel in our crown, a place of great beauty, now one of the biggest and best-stocked undergraduate college libraries in the university. I have no doubt that Pelham would have been delighted that our collection holds almost 120,000 items and is enriched by internationally important special collections, including those bequeathed by the estates of John Stuart Mill and Vera Brittain.

Henry Pelham made an extraordinary contribution to women’s education at Oxford and demonstrated this in many ways. His lectures were open to women students and he was an occasional tutor to some of Somerville’s best students. Perhaps most importantly, he supported membership of the University for women. Votes to admit women had failed in Oxford and Cambridge (in 1896 and 1897, respectively), and a proposal to establish a separate foundation, the Queen Victoria University for Women, was put forward by, among others, Bishop Percival, former President of Somerville Council. Pelham wrote him ‘a brief letter of reproach.’

When Professor Pelham died, a special place was reserved for Somerville students attending his funeral at the University Church. It is fitting that I end with an extract from the Somerville College Annual Report of 1907 which encapsulates his exceptional contribution to Somerville:

‘The late President of Trinity was one of the Founders of the College and was a member of the Council from the beginning. For the last twenty years he had served first as Vice-President … and from 1894 onwards as President. What the College owes to him, to his force of mind and character, his enthusiasm for education and learning, his wise counsel, his keen interest in all that concerned the welfare of the College, is known to all its members. They will moreover feel that they have lost in him not only an ideal President, but also a personal friend.’