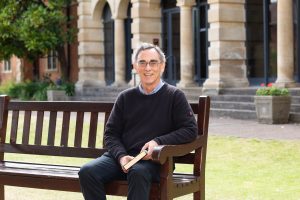 Roman came to Oxford in 1993 as a Tutorial Fellow. The move was not a smooth transition at first; in Roman’s own words, “it was a long way from a state school inPoland to Oxford”.

After studying for an MSc in physics from the University of Warsaw in 1977, he began his work onparticle physics and accelerator science at DESY and CERN, obtaining a PhD from Heidelberg University in 1981. Roman continued his work in these fields as a postdoctoral researcher, taking leading roles in the design of detectors and the coordination of large-scale research groups.

Having won renown as a particle physicist, Roman’s interests shifted to the design and development of laser plasma accelerators, work which promises to open the door to the next generation of particle accelerators and X-ray generators. Roman now leads the Lasers for Accelerators group at the John Adams Institute, and is also a senior member of the Plasma Accelerators and Ultrafast X-rays Group at Oxford.

Roman plans to continue this important research following hisretirement from teaching, while also devoting more time to his small family farm in Poland and to his passion for swimming.

Many will remember Roman’s unique teaching style. Generations of Somerville’s physics undergraduates have had their physical intuition put to the test, had their work ethics shaped – and no doubt been reminded on more than one occasion to practice their algebra!

He stresses the importance of deep symmetries, and of thinking before solving when faced with a problem. For example, when truly understood, one can simply “boost into the right frame and solve trivially”.

He is equally known for his minimalist comments on students’ scripts, preferring to discuss the problems in person during the tutorials. This epitomizes the way that Roman focuses his teaching on trying to ensure the students understand the underlying physics of the problem, rather than merely being able to answer exam-style questions.

The care that Roman takes over his students’ education is one of the many reasons he has been such a valuable tutor, successfully introducing us to such demanding courses as special relativity, quantum mechanics and particle physics.

Countless students have been inspired to pursue a career in research and academia, thanks in no small part to the manyinteresting and insightful conversations shared with Roman over the years, ourselves included. Few teachers can ignite such real passion in their students, with Roman motivating his pupils year after year.

While we hope that he will enjoy some well-deserved free time in the absence of teaching duties, we suspect that Roman will come to miss them too – for Somerville are certain to miss him.

We all wish him the very best for the future, and can only try to express our most sincere thanks for his years of hard work
at the College.

This article was orginally published in the 2019 Alumni Magazine.