Finding hope in hell: Dame Janet Vaughan and the liberation of Bergen-Belsen

If, in these times of adversity and isolation, Somervillians find themselves searching for a symbol of resilience, public service and intellect, they need look no further than Dame Janet Vaughan (1919, Medicine; College Principal 1945-67). 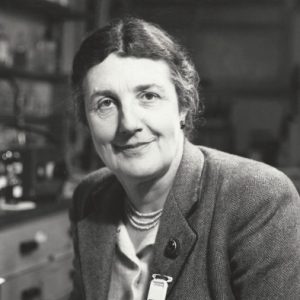 It is especially timely to consider her legacy now, since it was seventy-five years ago on April 15th 1945 that the British Army liberated the concentration camp of Bergen-Belsen and began a relief effort to which Dame Vaughan made a vital contribution.

Even before this historic intervention, the young Janet Vaughan had made a considerable impact on the world around her. As a young pathologist conducting postgraduate research at Hammersmith Hospital’s Royal Postgraduate Medical School, she overcame the institutional sexism that limited her access to patients, and succeeded in creating Britain’s first national blood banks.

The modified milk bottle for blood collection and storage which she designed was subsequently named after her, and, on the outbreak of war, her ground-breaking researches led to her invitation by the Medical Research Council to investigate the effects of starvation in Belgium, and Germany – a path that would ultimately lead to the gates of Belsen.

When the British army arrived at the camp on 15th April 1945, the scene they discovered there defied belief, even sanity. Thousands of bodies lay unburied around the camp and some 60,000 starving and mortally ill people were packed together without food, water or basic sanitation. Many were suffering from typhus, dysentery and starvation, exacerbated by the Nazis’ systematic neglect of prisoners during the last desperate months of the war. 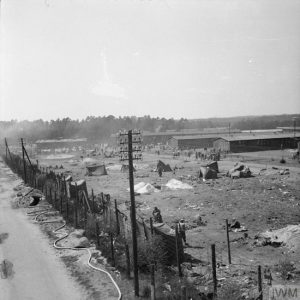 A view of Bergen-Belsen camp after its liberation in 1945: © IWM. 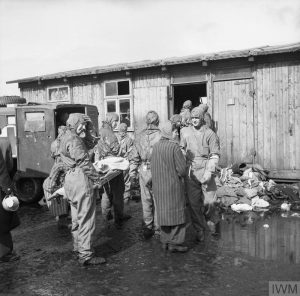 The Royal Arm Medical Corps evacuate inmates from one of the huts at Belsen. Copyright: © IWM

It was into this theatre of atrocities that the young Dame Janet would shortly enter, and where her innate empathy and clinical understanding of starvation would be tested to the limit.

Prior to her arrival, the British Army’s efforts to recuperate the starving prisoners were disastrous. Feeding the survivors on ‘compo’ rations – the stodgy diet of tinned meat, vegetables, fruit, puddings, butter, cheese and jam designed to sustain active soldiers – caused a renewed outbreak of illness among the inmates as their shrunken, weak intestines simply couldn’t digest such rich fare.

It was later estimated that 2,000 people died as a result of being given this initial, wrong diet. 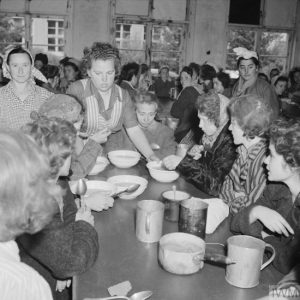 Women inmates enjoy a meal in one of the huts. Copyright: © IWM

Janet Vaughan arrived at Belsen shortly afterwards at the head of a Medical Research Council team supported by over 100 medical students. Her goal was to discover whether hydrolysates, a concentrated protein preparation, might offer a viable lifeline to the starving inmates, an experience she would later describe as like ‘practising science in hell’.

Conditions were appalling and, to make matters worse, the experiment did not go as planned. The hydrolysates, which were supposed to be administered orally, nasally or via IV drip, were intolerable to most inmates, either due to their horror of injections or because they could not stand the highly unpalatable taste. And yet, despite this setback, Vaughan was undeterred.

Having recognised the failure of the hydrolysates, she proceeded to find alternatives. Subsequent attempts to use the Bengal Famine Mixture, first pioneered during the Bengal crisis of 1943, were also unsuccessful, and it was only with the adoption of milk and very small quantities of food administered orally, that progress was eventually made.

Dame Janet returned to Britain in late May of 1945 to present her findings to the Royal Medical Council, leading the Medical Research Council to halt the production of hydrolysates. Shortly afterwards, she returned to Somerville to take up her post as Principal of the college and embark on a long, illustrious career of research and public service dedicated to enabling other women, like herself, to change the world.

Like many men and women of her generation, she would speak rarely if ever about her wartime experiences and what she saw – and yet, in a 1984 interview with Polly Toynbee, she would comment that it was the basic goodness of ordinary people which kept her going.

At a time like now, when many of us are not sure how to proceed or how the world might look in six months’ time, this dictum gives us a bearing. And Dame Janet herself remains a shining example of the Somervillian tendency to persevere in faith, integrity and hope.