Professor Richard Stone (FREng, FSAE, FIMechE) is a world-renowned authority in the mobility industry. He retires this year having been a Tutor and Fellow in Engineering at Somerville since 1993, during which time he has served twice as Vice-Principal, once at the peak of the Covid-19 pandemic.

This article was published in the Somerville Magazine 2022. 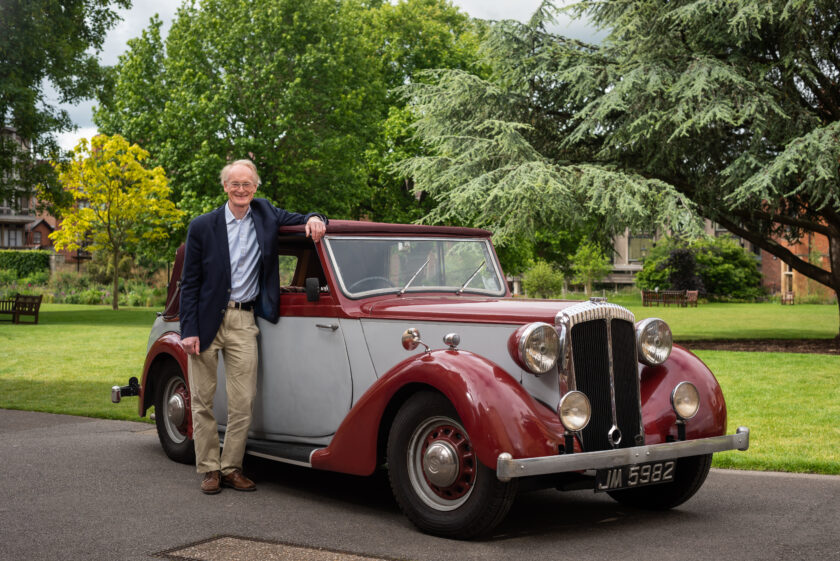 What was your path to Somerville?

I studied engineering at Cambridge as part of a ‘thick sandwich course’ in which I worked for the Ministry of Defence for the year before and after my course, as well as during the summers. Afterwards, I returned to Cambridge to start a PhD. However, when my supervisor moved to Oxford, I elected to go, too. This led to a Junior Research Fellowship at Jesus, followed by 11 years at Brunel, before returning to Oxford in 1993.

You were one of Somerville’s first male fellows. What was that like?

Governing Body was, of course, mostly female. However, there had been male lecturers in the SCR for many years and most of my interactions with colleagues were in the Department, so being a male fellow at Somerville did not seem strange. The biggest difference was having exclusively female tutees for several years. On a side note, I am informed that one of the most noticeable changes following the arrival of men was the food, both in terms of how much was eaten (substantially more) and the introduction of new dishes (chips were never served to the SCR before men joined).

All your students speak so highly of your kindness and transformative impact as a tutor. What is the secret to inspirational teaching?

I enjoy tutorial teaching and I would like to think that what I do is thorough – I couldn’t say whether it was inspirational. Over time, you learn what it is that causes difficulties and what sort of things examiners like to ask. The other great advantage of the tutorial system is that you really do get to know each student well, and that is ultimately why I have enjoyed – and will miss – giving tutorials.

What do you recall most fondly about teaching at Somerville?

There is a very distinct mixture of pride and relief when students who have been recruited on the basis of their potential achieve better results each year and then graduate with a 1st. There are also those interactions with students one always remembers. For example, the exchange between two of my tutees about their exam strategies. ‘No way will I do the Advanced Dynamics questions,’ Arabella announced. To which Caroline somewhat definitively replied, ‘I’ve burned the notes.’

The drive to switch to electric vehicles poses interesting questions for the future of your field. What do you see on the horizon for internal combustion engines?

You’re probably immediately thinking of cars, but I’d like to start with ships. Ships and aviation consume as much oil as each other and, if they were a country, would be ranked about 5th in the world for carbon emissions. Ships are likely to continue to use internal combustion engines on the grounds of cost and efficiency (maybe with ammonia as a fuel, or using oil combined with carbon capture and storage). With trucks, a switch to hydrogen engines is possible since refuelling could be at depots. This would be cheaper and give a better range and load capacity than batteries.

I think that the switch to electric cars, on the other hand, will be slower than the Government is anticipating. It is not just a matter of providing more base load generation or renewables combined with storage; the sub-station infrastructure needs substantial upgrading. If hydrogen can be made available, IC Engines would power cars more affordably than fuel cells, and with only a slightly reduced range. The only thing to say with certainty is that energy is going to become much more expensive.

What comes next for you?

I anticipate a transition into retirement rather than a step-change. In addition to retaining an informal involvement with my colleagues’ work, I will continue my editorial role on the Journal of Power and Energy, as well as reviewing grant applications for the ERC. Following a request from the publisher, I also plan to spend this winter revising Automotive Engineering Fundamentals; Introduction to Internal Combustion Engines [the definitive guide to internal combustion engines for generations of engineers] also needs a 5th edition, but time will tell if that is to happen.

Otherwise, there are several DIY projects on the agenda, and I hope to have time to join another choir and perhaps undertake some volunteering at the Gaydon Motor Museum. There should also be plenty of scope for travel. I bought a Daimler DB18 three years ago, but it has not seen much use yet. At the moment the cylinder head is on the bench for some remedial work. Once it is all back together, it will be ideal for local outings and perhaps venturing further afield, too.