In the year of the 700th anniversary of the death of Dante Alighieri (1265-1321), two Somerville students are creating a new, accessible digital edition of the opening chapters of Dante’s celebrated Divine Comedy, writes Katie Bastiman (2016, French and Italian, MSt Modern Languages).

It may be 700 years since Dante’s death, but the influence of his writing is still very present in our culture today, especially in the case of his magnum opus, the Divine Comedy.

The narrative poem, often hailed as one of the greatest works of Italian literature ever written, is about Dante’s journey through the afterlife (for, in a wonderfully bold move, he inserts himself into the text as the main character). This means that critics talk about Dante and the Comedy in a two-fold way, drawing a distinction between ‘Dante-the-character’ and ‘Dante-the-poet’.

In the narrative, Dante-the-character is guided through Hell, Purgatory and Paradise, where he speaks with and interrogates the souls of the dead. The cast of characters who make an appearance includes not only figures from the bible, but also from mythology and even many of Dante’s contemporaries. Dante-the-poet decides where each deserves to dwell after death, be it in the lowest circle of Hell or the highest sphere of Paradise, and Dante-the-character interacts with them while on his journey.

My fellow Somervillian Holly Abrahamson (2020, MSt Modern Languages) and I have been studying The Divine Comedy for a few years now, initially as part of our undergraduate degrees at Oxford and more recently through the MSt in Modern Languages course. As well as studying the text of the poem, this term as part of our Book History studies we will engage more with how the text has been recorded, illustrated, and transmitted by working on a beautiful manuscript of the Comedy.

This is the “MS.Canon.Ital.108” from the late 14th century. We chose it for several reasons: it is in good condition; it has already been scanned by the Bodleian which means that we can access it despite not being able to travel to Oxford this term due to the pandemic; and it boasts some wonderful – and often amusing – illuminations and drawings in the margins. 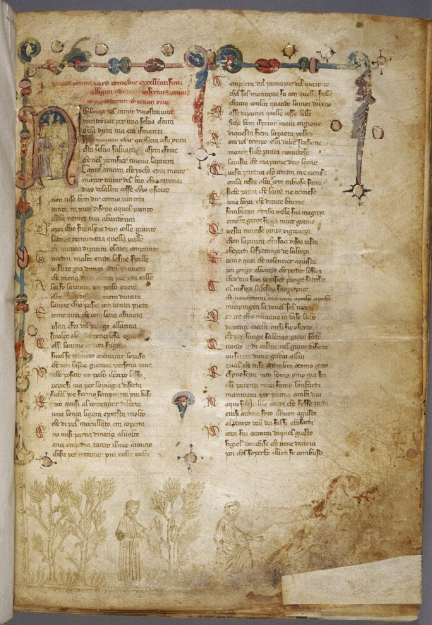 Dante’s Divine Comedy in the MS.Canon.Ital.108

So, what is the plan for our lovely manuscript?

Firstly, we want to use social media to share some of the incredible illustrated details with a wider audience. The images are varied and really bring out the excitement of certain moments in the text, from swarms of damned souls flying above Dante’s head to an angel and a demon fighting over a human soul. In order to do this, we have set up a Twitter account called @ante_purgatory where we will be sharing our favourite pictures from the manuscript, alongside some explanations of how it corresponds to the narrative. 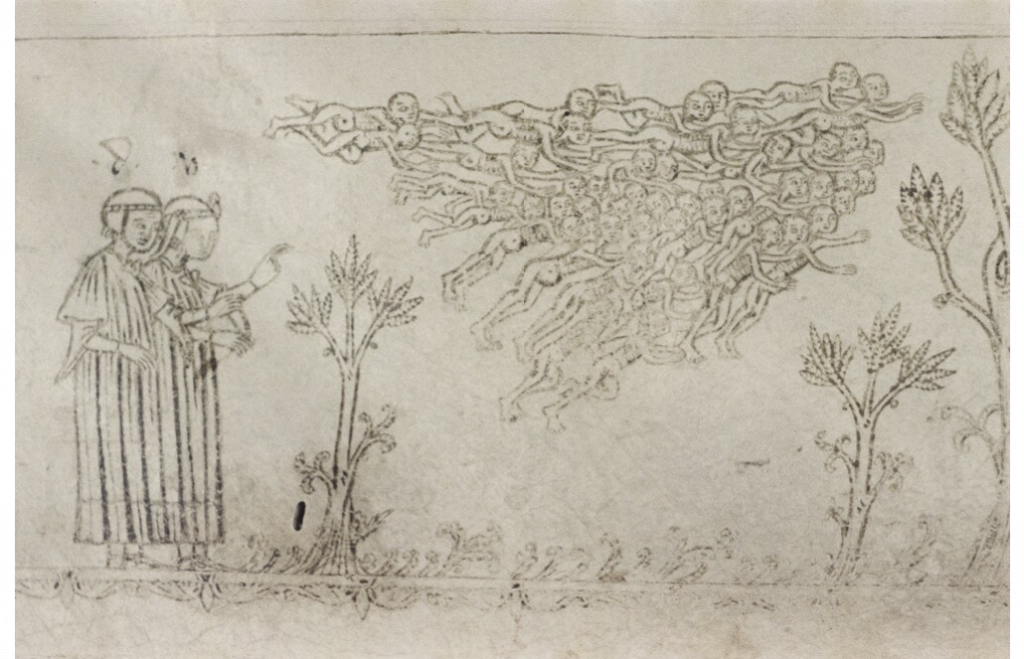 A swarm of the souls of the damned fly over Dante’s head.

Secondly, we are going to create a new digital edition of the manuscript to make it more accessible. A digital edition is a kind of website which will allow students, scholars, or anyone else who may be interested, to look at a scanned page from the manuscript alongside a transcription of the writing on that page so that the text is easier to read. We will also provide a translation of the Italian text into English to further improve accessibility. Having these three elements on the screen at the same time will make it much simpler and easier for people to engage with and enjoy our manuscript.

Dante’s Comedy is extremely long. Its 14,233 lines of poetry are divided into three parts (Hell, Purgatory, and Paradise). These are further divided into 100 cantos, which are comparable to short chapters. Because of this, we have had to be selective about which part of the Comedy we are going to use for this digital edition, since working on the whole manuscript would take far longer than a single Oxford term. We have gone with Ante-Purgatory, which is the first section of Purgatory stretching from Canto 1 to Canto 9. Nine cantos will provide us with more than enough to work with, and since this section of the text functions as a cohesive unit within the narrative, this felt like a logical choice. 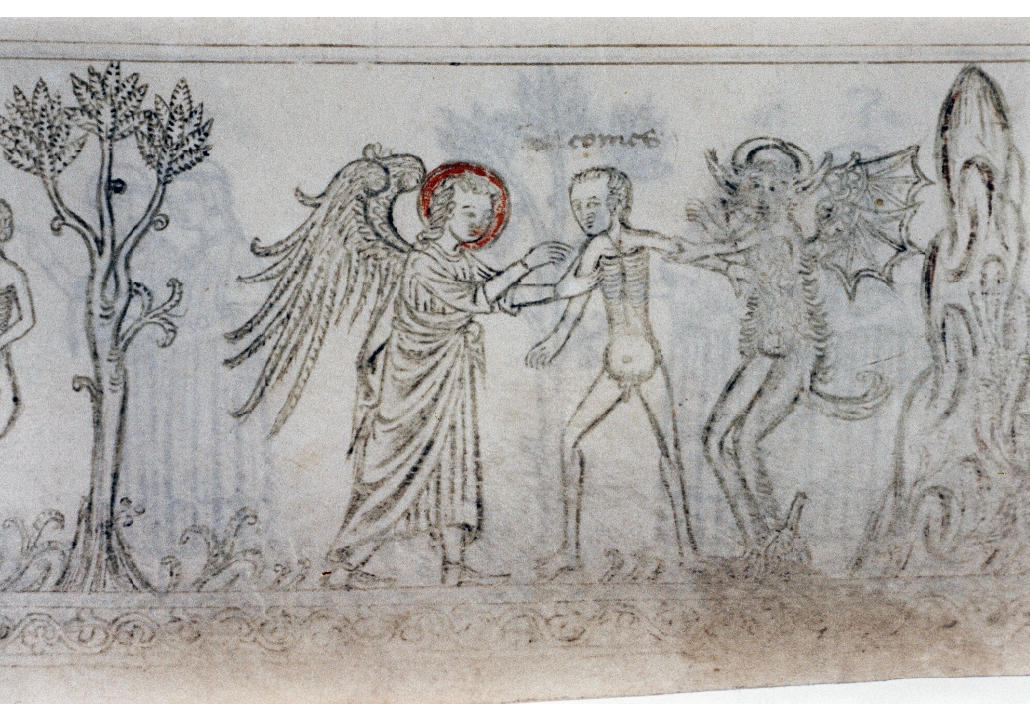 The concept of Purgatory was fairly new within Catholic doctrine when Dante was writing the Comedy, so there was less of a precedent or a tradition of other writers trying to depict it. Dante imagined Purgatory as an enormous mountain which could only be accessed by going through the centre of the Earth and out on the other side of the planet, in the Southern Hemisphere. Purgatory is a realm where the souls of the dead must work off their sins, and when they have eventually done so, they will be able to continue up the mountain and eventually ascend to Paradise. “Ante-Purgatory” is like a waiting room at the very bottom of the mountain, where particular souls are punished by being made to wait a certain amount of time until this process of purging their sins can begin. For Dante, those who were excommunicated or only repented their sins extremely late in life are among those who must wait in Ante-Purgatory until they can access “Purgatory Proper” and begin productively working to undo their sins.

I have looked closely at this section of the Comedy already as part of a very different project. In the final year of my undergraduate studies, I organised a choir concert entitled “Dante and the Music of Ante-Purgatory” in Somerville Chapel. During the concert, I narrated the storyline of these cantos and Somerville Choir sang settings of the various psalms and hymns referenced in this section of the poem. It was a really wonderful event and I’m so excited to be focusing on Ante-Purgatory again, albeit from a different perspective this time.

Holly and I can’t wait to get started on this project and we hope to create a really useful digital edition of this manuscript, as well as drawing some much-deserved attention to the beauty of the manuscript itself. If you’d like to know more, check out our post on the University’s History of the Book blog or follow us on Twitter at @ante_purgatory where we post regular updates. 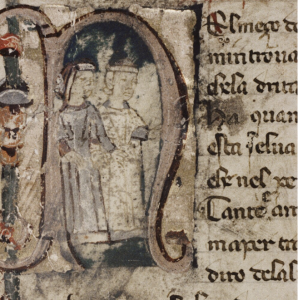 The beginning of Purgatory in MS.Canon.Ital.108.fol1r N