Teaching in Mathematics at Somerville has been strengthened by a generous gift in support of Dr Dan Ciubotaru, whose post has been retitled the Diana Brown Fellowship in Pure Mathematics; and by the appointment of a new Junior Research Fellow, Dr Beth Romano.

Dr Ciubotaru, who has been a Tutorial Fellow at the College since 2014, conducts research on representation theory, which investigates how abstract algebraic structures – such as “groups”, the mathematical notion that encodes the symmetries of various physical systems – act via linear transformations on vector spaces.

The donation was made in memory of Diana Brown (1957, Maths) by her widower Roy and their children Rosamund (1994, Law) and Adam (1998, Engineering) – both of whom followed in their mother’s footsteps to study at Somerville. Mrs Brown, who died in 2017, had successful careers in Maths teaching and business, and later served as Chair of the charity Population Concern. She also founded the World Population Foundation (now named Rutgers WPF). In 1995, she became Chair of the Somerville Appeal Committee, a post she held until its disbandment in 2003.

“I am very grateful to Diana Brown’s family for this generous gift, which will support teaching and research in Mathematics at Somerville” said Dr Ciubotaru.

“This is a particularly exciting time to be working in the field of representation theory because of the remarkable recent advances in the Langlands programme, a set of far-reaching conjectures that predict deep connections between elements of algebra, number theory, and geometry.”

Mathematics at Somerville is set to gain a further boost from the appointment of a new Junior Research Fellow, Dr Beth Romano. The post is offered in partnership with the University’s Mathematical Institute and was supported by generous donations from alumni.

Dr Romano, who is joining Somerville in October, attended Wellesley College for her undergraduate degree and received her PhD from Boston College in 2016. In her research she applies techniques from representation theory to several areas in number theory. Like Dr Ciubotaru, she studies the conjectures of the Langlands programme, as well as studying families of algebraic curves.

Mathematics is one of the most popular subjects at the College, with more direct applications made to Somerville for Maths last October than for any other undergraduate course. The College is one of just two at the University of Oxford named after a Mathematician. 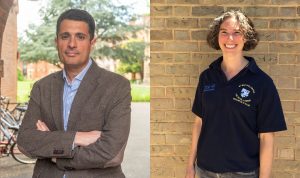