Somerville is delighted to share a new article in which one of its most distinguished scholars, Dame Averil Cameron (1958, Greats), reflects upon the formative moments and defining achievements of a long and illustrious career.

After early encounters with Latin at grammar school and ecclesiastical culture at church, Dame Averil’s development as a scholar of late antiquity and Byzantium takes off with its author’s arrival at Somerville in the late Fifties. Here, Dame Averil enjoyed seminal encounters with the Professor of Latin, Eduard Fraenkel, whose lectures were apparently rather daunting, yet also provided a masterclass in metre (as well as introducing the young Cameron to her future husband). 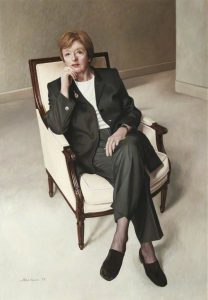 After Somerville, the story follows Dame Averil first to Glasgow to begin her PhD, then London, where she was to remain happily (and productively) from 1964 to 1994. It was during this time that Dame Averil completed her PhD, published her first book with the Clarendon Press and, latterly, founded the Centre for Hellenistic Studies at King’s College, London.

During her time in London, Dame Averil also held visiting posts at the North American universities of Columbia, Princeton and Berkeley. The lectures and work produced during these visits appear to have deepened Dame Averil’s interest in the power of language to change history – an interest that has exerted an important influence on her subsequent writing and thought.

In 1994, Dame Averil returned to Oxford as the first female Warden of Keble College. She speaks of the role with great fondness, not least for the opportunities it provided of writing the college’s first history, supervising ‘wonderful’ doctoral students and seeking to appoint more women to a Governing Body that was, at the time, overwhelmingly male.

There follow many wonderful stories about Dame Averil’s time in Oxford, including judging the Wolfson History Prize and working as the inaugural chair of the new Byzantine Research Centre. In 2010, Dame Averil retired from her position as Warden of Keble and Professor of Late Antique and Byzantine History – but clearly her joy in learning remains undimmed. She emerges, therefore, as the very epitome of a Somervillian academic, being fiercely intelligent, perennially curious and unfailingly gracious in acknowledging the value and influence of other scholars.