Celebrating 100 Years of Degrees for Women

100 years ago today, a group of women students of the University of Oxford – many Somervillians – doffed their caps and collected degrees alongside men for the very first time. Today, we take a moment to celebrate their astonishing determination and learning.

It is strange, now, to imagine a time when one could study as hard as the men, undergo the same hardships and acquire the same knowledge – yet emerge without any of the recognition. And yet, from Somerville’s inception in 1879 until 1920, this was indeed the case.

Emily Penrose after receiving her degree

However, another Somervillian also graduated that year – and that was Emily Penrose, Principal of Somerville College from 1907-1926. Penrose was a key figure in achieving degrees for women. She is pictured here shortly after graduating with Gilbert Murray, the Classicist and friend of the college.

Emily Penrose and the other heads of the women’s societies all received their degrees at the second degree ceremony that month, on the 14th October 1920. They all had MAs conferred on them by decree because none of them met the requirements to graduate. In Penrose’s case, this was because she had not completed the intermediate extension, despite being the first woman at Oxford to take a First in Lit. Hum. (Greats).

Perhaps due to these experiences, Emily Penrose was determined, when she became Principal of Somerville in 1907, that students should take the degree course where possible and meet all the other requirements to qualify for a degree –  both in residence and by passing the qualifying examinations such as Responsions.

As a consequence, when women were finally admitted to degrees, Somerville had 300 past students qualified to graduate. It is an astonishing tribute to her foresight and tenacity.

In the hundred years since women first won letters after their names, much has changed at Oxford and at Somerville. Women’s halls have become colleges and (with some resistance) admitted men. Furthermore, women have appeared in all aspects of university life, from the staircases of ancient foundations to prestigious professorships. Somerville still boasts more than its fair share of brilliant, no-nonsense women. The university has a female Vice-Chancellor. Since 2018, women have made up more than half of UK students admitted to the university each year. 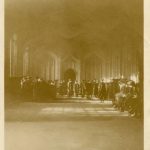 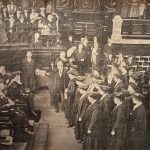 Heads of House receive their degrees

And yet, as always, there is still work to do. As Alex Foley, the SU VP Women observes, ‘The COVID-19 crisis has thrown the existing disparities in our society into stark relief. The asymmetries in the amount of unpaid labour women are expected to perform has become increasingly apparent, particularly mature students with caring responsibilities or student parents. The global events of the past few months have also demonstrated the long road we have to follow to achieve racial justice.’

But if there is anywhere this vital work can be done, surely it is here, where our predecessors were so instrumental in shifting the narrative and shaping the world. The current generation will surely keep pushing that narrative even further, towards full gender equality for all. And more strength to them.