“All of the best women in the world were here”: Interview with Dr Peggie Rimmer

Dr Peggie Rimmer (Mary Ewart Junior Research Fellow, 1964-67) went from the first person in her family to study at University to become one of the leading voices of CERN’s computing revolution, heading a team including Professor Sir Tim Berners-Lee – the inventor of the World Wide Web.

Here, she reflects on being a trailblazer in a field where women are still underrepresented, and the remarkable intellectual climate of Somerville.

Why did you choose to become a physicist, and were you ever bothered that it wasn’t considered a career for women?

I was interested in all of the sciences up to a point, but physics was always the best. Chemistry is so complicated with its pages and pages of benzene rings. Biology was even less palatable to me. Now, a hydrogen atom – that’s different. One electron, one proton. There’s some hope of understanding that. It’s so simple. Physics is in everything; anywhere you look, it’s all physics if you understand it. It’s amazing that our brain is a collection of atoms that can figure all of that out. I was transfixed by the sheer magic of it.

Until I went to University, it simply hadn’t occurred to me that women didn’t do everything. My mum did all the cooking, she made my clothes, but my dad taught me to fish and mend my shoes with leather and nails. I went to an all-girls school where I learned everything I knew from the nuns who taught there. It wasn’t ever driven home to me that I was a girl and that there should be limits on me because of this. I followed whatever fascinated me.

Women are still underrepresented in physics. Do you have any thoughts about why that might be and what we should be doing about it?

I don’t know why the subject doesn’t appeal to girls. It is true that maths and physics are difficult. I mean, if it took a genius like Einstein to figure out General Relativity, there are going to be people who would like to understand what he’s talking about and never get there – so I can’t pretend it’s easy. But why girls should think that they can’t do it, I don’t know. It must be some kind of all-pervading societal influence.

What you can do all comes down to your wiring. Some people can compose music for huge orchestras, some people can dance ballet, some people can prune trees, and so on. The important thing is for your parents or whoever is looking after you to let that wiring sort itself out without putting any limits on you, to let you discover for yourself “What am I good at? What am I interested in?” Hopefully, for some women that will be physics. I feel extremely lucky to have been interested in physics.

I think it’s important to step up and be a role model yourself whenever you see an opportunity. I went to a seminar at a planetarium recently where I was sitting next to a young lady. She told me she was in sixth form and was off to university next year and she wanted to be an astrophysicist. I said “you’ve got it absolutely right, astrophysics is where it’s going to be from now on. And you’ve got all the best pictures – particle physicists can’t show off pictures like that!”. Unfortunately, she had to leave early to catch her train home, but I thought “If only I could have had a cup of tea with her at the interval, I could have really made sure she had the bug”. That said, I think she was bitten already! So, there are women out there interested in the sciences – plenty of us. And there will be more.

You mention being a role model. Who were your role models?

My big role model at school was my Maths teacher Miss Ormerod. She wore tweed suits with double breasted jackets, thick lisle stockings and high-heeled brogues. She drove a Hispano Suiza drop-top car. She was a fantastic teacher and the reason why I decided I wanted to do maths and physics at Liverpool.

When I got to University, I found myself suddenly in a world where there were no women at all. I had travelled from an all-female environment to an all-male one. Out of eighty freshers there was only a handful of females, four I think. I don’t recall being taught by any women during my time at Liverpool – I didn’t come across any women in the labs while researching my DPhil once I moved to Oxford either. It was just at a time when you do need a role model, when you’re starting to think “what am I going to do next?”. Fortunately, things were totally different when I came to Somerville as a Junior Research Fellow after completing my doctorate.

Somerville at the time was the best of the women’s colleges, and one of the best in the University outright. There were very few colleges for women so rather than being dispersed across the University, all of the best women in the world were here. There was Dorothy Hodgkin, Enid Starkie, Philippa Foot, Elizabeth Anscombe, Agatha Ramm, and many more. It was ridiculous – it was fantastic.

Dame Janet Vaughan was Principal at the time. She taught us that you could be a woman and have a career and have a family (although they were never really in evidence); she’d been part of the war effort; she knew all of the Bloomsbury Group. I could say she didn’t suffer fools gladly – but she simply didn’t suffer them at all! I was most impressed by her. She really was an extraordinary character.

It was dreamy. The best time of my life was here. Somerville seemed completely abnormal to many on the outside, but I felt that I was normal here – that I belonged.

You can read more about Peggie’s life and career at CERN in her article for the 2015 Somerville Magazine. 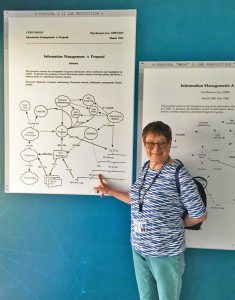 Dr Peggie Rimmer indicating her team at CERN in the 1980s, of whom one member was Professor Sir Tim Berners-Lee