Matt Hawkins (2007, History) and Jennifer Nadel co-edited the forthcoming book: How Compassion Can Transform our Politics, Economy, and Society (Routledge) The book is a collection of essays by academics and draws together experts across disciplines – ranging from psychology to climate science, philosophy to economics, history to business – to explore the power of compassion to transform politics, our society, and our economy.  Matt and Jennifer will be joined by contributors Professor Anthony Grayling and Professor Danny Dorling to discuss how a compassionate approach can revolutionise different aspects of our lives.

Unfortunately Mark Maslin is no longer able to join us for this event. We are delighted that Professor Danny Dorling will be joining the panel in his place. 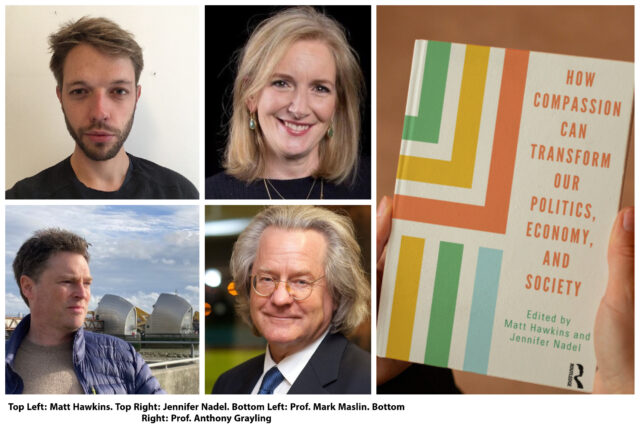 Matt Hawkins: Matt is Co-Director of Compassion in Politics and has led a number of social and environmental justice campaigns. He was part of the Nobel Peace Prize winning team at the International Campaign to Abolish Nuclear Weapons (ICAN) which successfully lobbied the UN to introduce a ban on nuclear weapons. Most recently, he managed the Equal Civil Partnerships Campaign which secured the introduction of civil partnerships for mixed-sex couples. He studied History at Somerville College from 2007 to 2010.

Jennifer Nadel: Jennifer Nadel is Co-Director of Compassion in Politics, a qualified barrister, author, political strategist, activist and award-winning television journalist. She has reported for the BBC, Channel Four News and was ITN’s Home Affairs editor. Her report exposing the use of rape as a weapon of war in Bosnia was used by UN war crimes investigators and she’s reported extensively on how the law discriminates against women. Her most recent book, WE, charts how to bring about individual and societal change. Her father came to the UK on the Kindertransport. She is on the board of INQUEST, a charity which supports families whose relatives have died in custody.

Prof Danny Dorling: Danny Dorling is Halford Mackinder Professor of Geography at the School of Geography and the Environment at the University of Oxford. He has published, with many colleagues, more than a dozen books on issues related to social inequalities in Britain and several hundred journal papers. His work concerns issues of housing, health, employment, education and poverty. He is an Academician of the Academy of the Learned Societies in the Social Sciences, was Honorary President of the Society of Cartographers from 2007 to 2017 and is a patron of Roadpeace, the national charity for road crash victims.

Prof Anthony Grayling: Anthony Grayling CBE, MA, DPhil (Oxon) FRSL, FRSA is Master of the New College of the Humanities, and a Supernumerary Fellow of St Anne’s College, Oxford. Until 2011 he was Professor of Philosophy at Birkbeck College, University of London. He has written and edited over 30 books on philosophy and other subjects; among his most recent are The Good Book, Ideas That Matter, Liberty in the Age of Terror, and To Set Prometheus Free. For several years he wrote the ‘Last Word’ column for the Guardian newspaper and a column for the Times. He is a frequent contributor to the Literary Review, Observer, Independent on Sunday, Times Literary Supplement, Index on Censorship, and New Statesman, and is an equally frequent broadcaster on BBC Radio 4, BBC Radio 3, and the World Service.

Women, Power, and Property: The Paradox of Gender Equality Laws in India