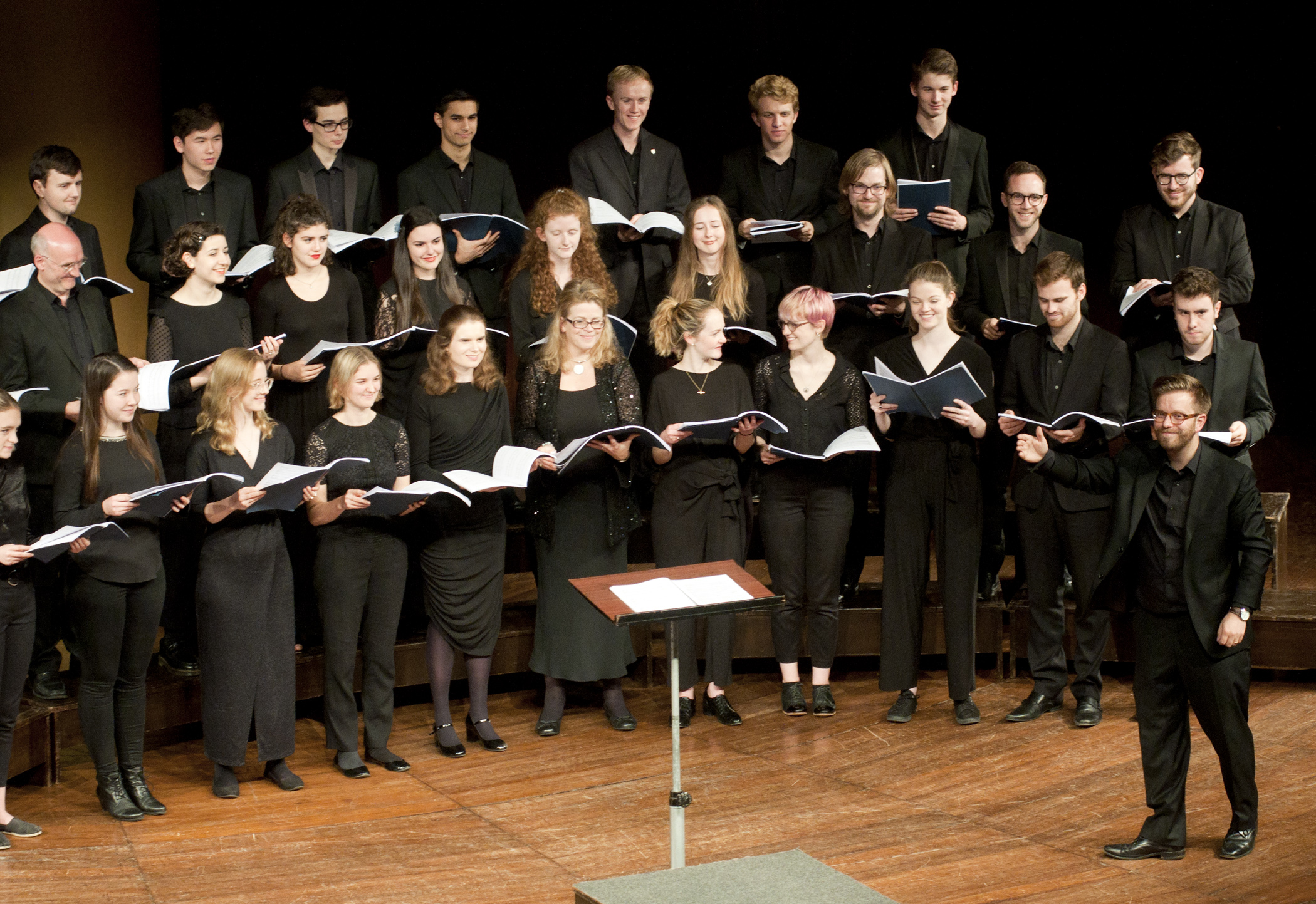 The Choir of Somerville College is one of the most notable mixed-voice choirs in Oxford. It is led by the Director of Chapel Music Will Dawes with the assistance of the Organ Scholars, and plays a central role in College life.

Somerville College Choir was established in 2001 and is made up of 28 singers from Somerville College and the wider Oxford community. Made up of choral scholars and volunteers, the choir is an ambitious yet supportive choir that’s professionally directed and meets to rehearse and perform only twice per week (Thursday 5.15-6.45pm and Sunday 3.45-7pm). . Its members flourish within an atmosphere of inclusion, mutual respect, and good humour, achieving a very high standard of performance. It is the only auditioned college choir to sing as part of a non-denominational format in the weekly service, meaning our repertoire draws from a diverse range of secular works in addition to favourite anthems from the Anglican choral tradition. A significant proportion of our output is by female composers and/or poets.

The choir’s main duty is to sing for Choral Contemplation in the College Chapel every Sunday evening during term. The choir is unique in being the only auditioned college choir in Oxford to sing at weekly services but in a non-denominational format, meaning that the repertoire possibilities are much larger than any other college choir, including a significant quantity of secular works, in addition to anthems from the Anglican choral tradition. Alongside the regular diet of smaller works, large scale works performed include Handel Messiah, Mozart Requiem, and Bach St John Passion, the latter being performed in the college biennially with the Instruments of Time and Truth. Another recent highlight was a performance of Spirituals and Hymns with the 20s Jazz quintet, the Basin Street Brawlers

For a relatively recently established group, the choir has already achieved much. Aside from singing in services in many UK cathedrals, including St Paul’s Cathedral, London, the choir has put on productions of Purcell’s Dido and Aeneas and Gluck’s Orfeo ed Euridice.  The choir recorded its first commercial CD Requiem æternam (Maurice Duruflé’s Requiem and Robin Milford’s Mass for Five Voices) which was released by Stone Records in August 2012. The choir’s second CD, Advent Calendar, which was released in autumn 2013. The choir has also appeared on BBC Radio 3 and plans to record a new CD in 2021

Tours are a major part of the choir’s identity.  The choir has previously toured to destinations such as Germany, Italy, and the United States (in 2014 and 2016).  However,  In December 2018 the choir became the first Oxford College Choir to tour India, performing concerts and taking part in outreach activities in Mumbai and Goa, in association with the Oxford India Centre for Sustainable Development and British Council.  There are plans to tour Hong Kong and Singapore, as well as a return visit to the USA over the coming years.

Members of the choir also sing in the National Youth Choir of Great Britain, the Rodolfus Choir, and Schola Cantorum of Oxford, and several past and present members of the choir have enjoyed being part of Genesis Sixteen.  The choir has recently benefitted from workshops with Ben Parry (Director of the National Youth Choir), The Kings Singers, Giles Underwood, and Rachel Nicholls.

If you are interested in joining the choir, please contact Will Dawes to arrange an informal audition. The choir is open to undergraduates and postgraduates from Somerville and other Oxford colleges. Choral scholarships are awarded every year, both through the centralised Choral Trials scheme, and also during fresher’s week at the start of every Michaelmas term.