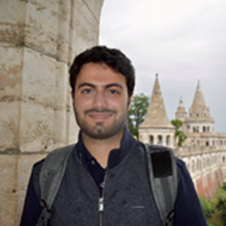 Mathew completed his MSc in Modern Middle Eastern Studies in 2020.

Mathew Madain, a native of Los Angeles, graduated from UC Berkeley in May 2019 with Phi Beta Kappa honors and bachelor’s degrees in History, Near Eastern Studies, and Global Studies. As a Haas Scholar, Mathew conducted historical research in Jordan on the experiences of Arab civilian communities during World War I.

His undergraduate thesis, which examines memory of the 1918 Exodus of Transjordan’s Christian families, was presented at the Eastern Mediterranean Studies International Graduate Conference in Budapest this summer. He will further be presenting on the topic at the Mediterranean Studies Association Congress in Gibraltar in May 2020. Mathew is currently pursuing an MSc in Modern Middle Eastern Studies under the supervision of Professor Eugene Rogan and serves on the editorial board of the Oxford Middle East Review.