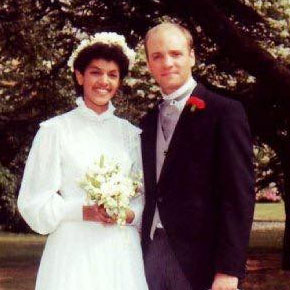 At the Beginning of Trinity term 1982, I was a first-year undergraduate at Trinity College.

One morning there I met K, a lovely young girl from Somerville who had just broken up with her Trinity boyfriend and was rather distressed. I invited her into my rooms, made her a cup of tea and cheered her up a bit. Apparently K took a bit of a shine to me and asked her former boyfriend’s friends to engineer a meeting with me. A couple of days later, these same friends persuaded me to attend a disco at Somerville- a college I’d never previously visited.

When I entered the Somerville Bar, it was clear that there was no disco, just a darts match between the two colleges (apparently the Trinity boys had told K that I’d only be persuaded to come along if there was dancing). Nonplussed, I scanned the crowded room and saw Sarah for the first time. She positively sparkled with life. I immediately went over to K, the only other girl in the room I knew slightly, and said “Hi, how are you?”, pointed to Sarah and said “who’s she?” That night I came back to Trinity and told my roommate that I’d met the woman I was going to marry. Two years later, in August 1984, I did.

(Sorry, K – you were charming and beautiful, but I only ever had eyes for Sarah.)