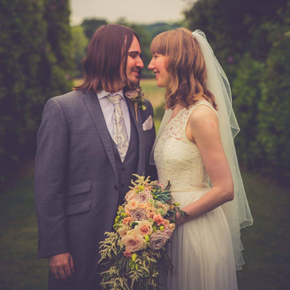 Ben and I met on our first day at Somerville when we were put next door to each other in Vaughan.

Ben was already a quite tipsy when I arrived and was standing in his room with his door propped open, bottle in hand, hair down to his shoulders (and generally a bit scruffy looking) and said, “hi, I’m Ben…would you like some whiskey?”

Being an insufferable goody two shoes, my immediate reaction was to wonder what on earth I was going to be living next to for the next year. I politely declined before scuttling away and firmly shutting my door.

Later that day other people started congregating in Ben’s room (probably lured by the whiskey) and it seemed safe to go and say hello.

We became best of friends over the next year and eventually got together in our second year while we were living out in Jericho (which I’m sure wasn’t at all awkward for our housemates…). We lived together in a DHQ flat in our third year and rented a house just over Folly Bridge together for Ben’s fourth.

Somerville’s decision to accept men a decade or so earlier saved us the ‘moving in together’ conversation as well as the trauma Ben’s dad suffered years before when he impaled himself on a fence spike as he attempted to sneak in to see Ben’s mum (St Hilda’s). It’s also safe to say that, but for Somerville’s impeccable room allocation, I might have continued to avoid the scruffy engineer with shelves filled with more booze than books.

Ben and I have lived together in London for the past 7 years. We married last year surrounded by Somervillians who have known us both since the day we met.