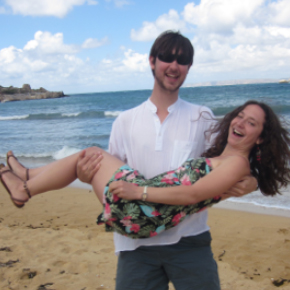 Nick and I met on our first day at Somerville.

We were next-door neighbours in the delightful Vaughan, and were instantly best friends. During Freshers’ Week, we joint-hosted a whisky and mango party in my room, went on barefoot walks around University Parks together, and swapped clothes for our first bop (he looked fabulous in my mini-skirt and tight-fitting top). We were inseparable in the first term, providing shoulders to cry on or tea to laugh over. I looked forward to him coming back from lectures and yelling “Milk no sugar ta!” through our adjoining wall. He helped to re-hang my door when my well-meaning but moronic boyfriend removed it as a “hilarious” practical joke (although I subsequently learnt that Nick had provided the screwdriver for the job).

Although neither of us realised it, we were becoming closer. We finally kissed on the first night of the second term, but kidded ourselves that it didn’t mean anything. We kept our courtship a secret, shutting and locking our doors, then climbing across the narrow and frankly dangerous ledge outside into each other’s rooms. Gradually it became more and more obvious to others when we danced together at bops and giggled together behind our hands at in-jokes that no one understood. The secret was out.

We’d already signed up to live in the same house in second year, way before we became a couple. We lived with two of our closest friends and had an amazing year, eating 21-course meals, going to balls, day trips to Paris and the like. Then final year came, and Nick and I helped each other through finals, and applications for the next stages of our lives. He even acted as my “lawyer” at a student disciplinary panel I had to attend, after appealing a fine for throwing a trifle in someone’s face after their final exam (I think the tapes are still somewhere in Wellington Square).

We stayed together after finishing at Somerville, first in Oxford, then between Oxford and Southampton while he completed his Master’s and I started my nurse training. Sadly, we broke up in 2013, but remained excellent friends. Then at the formal and bop hosted by Somerville to celebrate 20 years of co-education in September 2014, Nick and I kissed again. In the background, our college daughter shouted “Mummy and Daddy are getting back together again!” Once again, we grew closer and closer, making excuses to bump into each other on nights out and spending an awful lot of time in each other’s company. Eventually he asked me out again, and I of course said yes.

We’ve been together ever since, and now live together in cohabiting domestic bliss. On 22nd December 2016, he made a treasure hunt for my Christmas present, which turned out to be a beautiful diamond ring. We don’t know when we’re going to get married yet, but we’re planning to spend the rest of our lives together, as best friends who are very much in love.