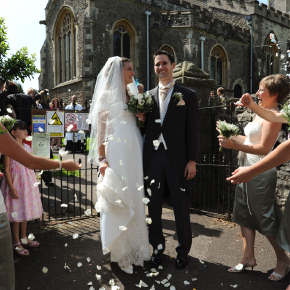 Andrew matriculated in 2001, and had been studying EEM for two years when I arrived in 2003 to study Human Sciences. Little did we know that we were living opposite the quad from each other: me in a quad-facing Vaughan room and him in Holtby.

We didn’t meet until the 2nd of December, the Tuesday of 8th week though, and cheesy as it sounds, it has to be the best moment of my life and I frequently retell the story of our meeting!

Andrew had been to Formal Hall with friends, and rather embarrassingly, I had been busy with some last minute essay writing and a bottle of wine in my room. I met with friends beneath Vaughan after Formal, and we all headed to Filth, as it was affectionately known then. I hadn’t been inside for long when I spotted Andrew, though he appeared a bit camouflaged in the darkness with his black jumper and hair! I asked a friend of mine Emma Walker (nee Maitland) who he was, which was a bit funny because he was only a metre or so away from me at this point, probably heard me, and I could have just asked him myself… Anyway, when told that he was Andy, I then proceeded to ask if his name was Andy and if he would like to dance with me. Despite my social ineptness, luckily he did agree. I remember the moment I first saw him, and can say that it was definitely a case of love at first sight for me! All he remembers of our first meeting is that I was really tall!!! Despite slipping on our walk home and landing on my bottom in a puddle, we were never apart from that moment on.

I am glad to have met Andrew in my first term because all my memories of Somerville, and Oxford, have him in them. I confess that I used to hide love notes in old books in the library, which owing to the nature, and location of the books I chose, are probably still there undisturbed but sadly I can’t remember exactly which books now..!

Thirteen years later, we now live happily in North Hampshire (Andrew a Treasury Manager, and me a part-time Primary School Teacher) with our three girls: Olivia (6), Natalie (4) and Hermione (1). Although life is much busier, and less romantic than it was in our pre-children years, I am beginning to recall memories of our adventures in Oxford together for our daughters which brings me much joy. We will return again soon to show the girls around and enjoy a baguette from Taylor’s like ‘the old days’! We are both very proud Somerville Alumni! 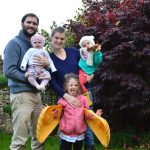 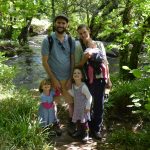 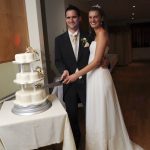 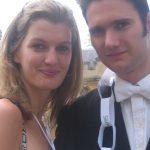 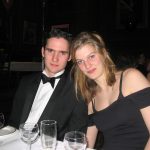