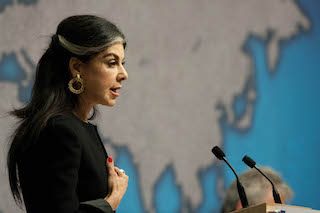 ‘From the moment I got to the lodge, I felt welcomed,’ Mai Yamani remembers. It’s a familiar story for Somervillians: that immediate feeling of finding themselves at home. But not so many of them have travelled through four countries, five languages and countless schools to get here.

In many ways, it was the perfect training for an anthropologist, and it’s the nature of the human condition that continues to fascinate Dr Mai Yamani. Now an independent scholar, author and broadcaster with a particular interest in Muslim and Arab politics, Yamani has authored Changed Identities (2002) and Cradle of Islam (2004) edited Feminism and Islam (1996) and co-edited The Rule of Law in the Middle East and the Islamic World (2000) alongside a raft of academic papers and journalistic writing, as well as holding Research Fellowships at the Royal Institute of International Affairs, Chatham House, the Brookings Institute in Washington D.C., SOAS, LSE, Georgetown University and the Carnegie Endowment for Peace in Beirut.

The first Saudi woman to read for an Oxford MSt and DPhil, Yamani’s journey to Somerville was certainly an unusual one. Moved from school to school as a child in Baghdad and Jeddah, she went on to spend eight years at school in Lausanne (‘what mattered there were the social graces, deference, the cultural rites. It was a finishing school’), she announced at fifteen that she wanted to go to university. When she was told she wasn’t at all prepared, she decided to prepare herself, and learned enough in the space of three years to win her a place at the prestigious Bryn Mawr College in Pennsylvania. ‘I loved it there,’ she says, ‘and it was such a change from all that deference!’ Bryn Mawr was where she first realised that anthropology was her vocation. ‘I saw the course title ‘Man, culture and society’ and thought “that’s the one for me!”

Mai is the first to admit that her background was a privileged one. In fact, it connected her to another Somervillian, Margaret Thatcher. Yamani’s father was Saudi Arabia’s Minister of Petroleum Affairs, and she remembers Thatcher coming to their house in Riyadh on a number of occasions. ‘But no matter what your background,’ she says, ‘there is still that moment when you arrive somewhere new and you are the only one from a particular culture. It can be challenging. And then I think about someone like Margaret Thatcher. I remember meeting her at Somerville and admiring her dedication to education. She came from such a modest background and she needed financial support, and alongside that the College offered her academic and personal support too. What’s so extraordinary about this place is how background doesn’t matter. The love of knowledge and of learning brings us all together. Your religion, your race, your gender, your class, all of that just falls away in the face of shared intellectual endeavour. I’ve never been anywhere else where that is so truly the case.’

What made Somerville feel even more like home to Yamani was the support she received, and she holds a particular place in her heart for then Principal Baroness Park. ‘When I left Somerville after finishing the MSt, I went on to become the first woman lecturer at King Abdullah Aziz University in Jeddah,’ Yamani says. ‘I was there for three years, and through all that time, Lady Park continued to write to me, to tell me that I should come back to Oxford and take my DPhil, and that is what I did.’ By then, Yamani had had her daughter, and when she raised concerns about how she could combine childcare and her studies, Baroness Park made sure that there was a place was made available in the Somerville crèche.

‘I feel such gratitude to Somerville and to Oxford,’ Yamani says. ‘For me, it represents the very best traditions of academic life: respect, discipline, focus, hard work and freedom. I’m proud that Somerville is part of my life.’