The Oxfordshire Blue Plaques Board has unveiled a blue plaque to celebrate the life and achievements of Britain’s only female scientist to have won a Nobel Prize, Somerville alumna and Fellow Dorothy Hodgkin, née Crowfoot (Chemistry, 1928).

The board decided to honour Hodgkin with a plaque at 94 Woodstock Road, where she lived from 1957 to 1968 with her husband Thomas, their three children and her sister, Joan and her five children. Elspeth Garman, Professor of molecular biophysics at Oxford and a leading crystallographer, gave the address. Among those attending were Professor Hodgkin’s son, Luke Hodgkin and her daughter, Elizabeth Hodgkin. Other family and friends in attendance included the actress Miriam Margoyles, school friend and long-term friend of the Hodgkin family; representatives of Oxford University Chemistry Department and Dr Alice Prochaska, Principal of Somerville College.

Hodgkin came to Somerville College to read Chemistry as one of only four scientists at Somerville in her year. The undergraduate course at that time did not include x-ray crystallography but she was inspired by the pioneering work of Sir William and Lawrence Bragg and had the opportunity to do research in the field in her fourth year. She graduated with first class honours and moved to Cambridge University as a research student, gaining her PhD in 1935. In 1934 Hodgkin was invited back to Somerville as a research fellow, later fellow and tutor. By 1945 she had determined through x-ray diffraction techniques the structure of penicillin, by 1955 that of Vitamin B12, and by 1969 the structure of insulin. She was one of the first fellows at the College to be married and in 1938, not only the first fellow at Somerville to start a family whilst in post but also the first woman to receive maternity pay at Oxford University. She always took a close interest in the careers of other women scientists, and helped found the Somerville college nursery as one way of supporting women academics.

Hodgkin was appointed to a University Readership in 1955 and became Wolfson Research Professor in 1960. Throughout her career at Oxford she was a fellow of Somerville and the College was her main if not only source of salary until 1955. After her retirement she was appointed an Honorary Fellow. In 1970 she was elected Chancellor of the University of Bristol, an honorary position that allowed her to continue her work at Oxford until her retirement in 1977.

Dorothy Hodgkin was also active in various political causes, most notably Operation Pugwash, the campaign against nuclear which she co-founded on whose behalf she travelled all over the world. 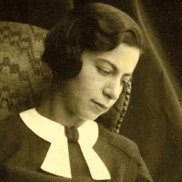